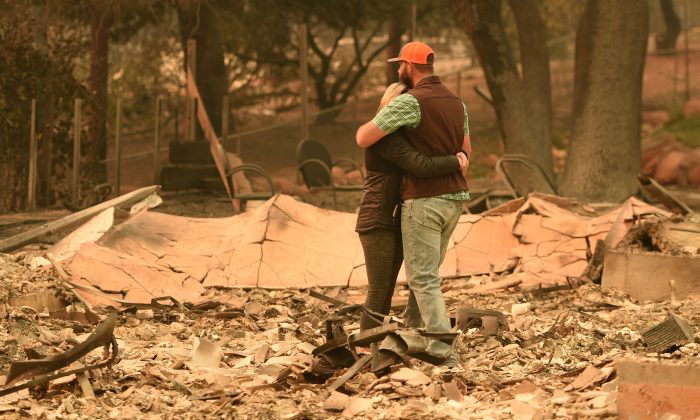 A couple embrace while looking over the remains of their burned residence after the Camp fire in Paradise, Calif., on Nov. 12, 2018. (Josh Edelson/AFP/Getty Images)
Southern California

Tens of thousands of wildfire victims could soon miss out on an opportunity for compensation as the Oct. 21 deadline to file claims draws near.

As many as 40,000 victims affected by a series of devastating blazes that ravaged parts of California over the last four years have not yet filed claims in Pacific Gas and Electric Company’s bankruptcy case. The San Francisco-based company has been blamed for causing many recent fires. So far, about 30,000 victims have filed claims through lawyers and another 1,500 have done so on their own.

PG&E, which filed for bankruptcy protection in January, has earmarked $8.4 billion for payouts to victims and says it will honor all court-approved claims. About 6.2 million claim forms were mailed out to possible wildfire victims, and the utility reached out to them via email, social media, television, radio and other forms of advertising, according to the company.

PG&E is under pressure to wrap up court proceedings and produce a bankruptcy reorganization plan by the end of June 2020 in order to access a $21 billion state wildfire fund created in July.

According to court papers filed Oct. 4, PG&E said it has made progress toward getting a plan confirmed, including obtaining more than $14 billion in equity commitments from investors and settling for $11 billion with insurance companies. PG&E announced in mid-September that it would settle with most of the insurers in the 2017 Northern California wildfires and the 2018 Camp Fire. The settlement was expected to cover about 85 percent of the claims from the 2017 wine country fires and 2018 Camp Fire, which killed more than 80 people and gutted the town of Paradise last November.

PG&E said it has obtained $34.4 billion in debt financing commitments from banks, including JPMorgan Chase & Co., according to court documents. The company stated that the terms are “far superior” to a competing proposal from to a group of bondholders led by Elliott Management Corp. and Pacific Investment Management Co. which PG&E has strongly opposed.

PG&E recently began a series of power shutoffs, affecting customers in northern and central California on Oct. 9. The company has stated that the purpose of the shutdowns is to minimize the risk of wildfires during times of high-risk weather conditions. For updates on the PPG&E’s Public Safety Power Shutoff, the company has asked customers to visit the website pge.com/pspsupdates.

Sen. Senator Jim Nielsen (R-Tehama), who represents Paradise where thousands of wildfire victims are still displaced, said in a statement on Oct. 9 that the power outages are wreaking further havoc on daily life in the area.

“PG&E’s massive power shutoff is unacceptable. This policy has to change. PG&E’s decision to protect itself from liability at the expense of hardworking Californians will not be tolerated. This disregards people’s livelihoods. We depend on electricity to live and earn a living,” Nielson said.

“Millions without electricity is what a third world country looks like, not a state that is the fifth-largest economy in the world. Schools closed. Government offices closed. Businesses closed. Employees were sent home as businesses had to shut their doors. Some workers are forced to go without pay. Parents scrambled to find babysitters, raced to buy battery-operated lights and rushed home to prepare their families in anticipation of days of darkness. This is no way to live. We are in the United States of America. Access to electricity is a basic necessity for life.”

Neilson said the PG&E’s power shutoff plans negatively affected 800,000 customers and urged state legislators to rigorously examine whether or not PG&E is capable of delivering reliable, safe electricity to residents.

“This ham-fisted policy by PG&E appears to be nothing more than a very selfish approach to protecting corporate interests at the expense of customers who cannot shop elsewhere for this vital utility—electricity.”

Meanwhile, on Oct. 2, California Gov. Gavin Newsom signed into law a series of bills that deal with wildfire prevention, mitigation and response efforts, and clean energy goals. The 22 bills reflect recommendations of the Governor’s Strike Force on “how the state can build a safe, reliable and affordable energy future,” according to a media release from Newsom’s office.

“This has been a top priority in my administration since day one, and we were able to work collaboratively and effectively with the Legislature to ensure California has a framework for today and for future generations,” Newsom said in the release. “Given the realities of climate change and extreme weather events, the work is not done but these bills represent important steps forward on prevention, community resilience, and utility oversight.”

The Governor’s Strike Force report, released in June, focuses on:

The 22 Assembly Bills (AB) and Senate Bills (SB) that Newsom signed into law include:

According to the Public Institute of California (PPIC) statewide survey results released in July, 71 percent of likely voters in California are “very concerned about wildfires becoming more severe due to global warming.”