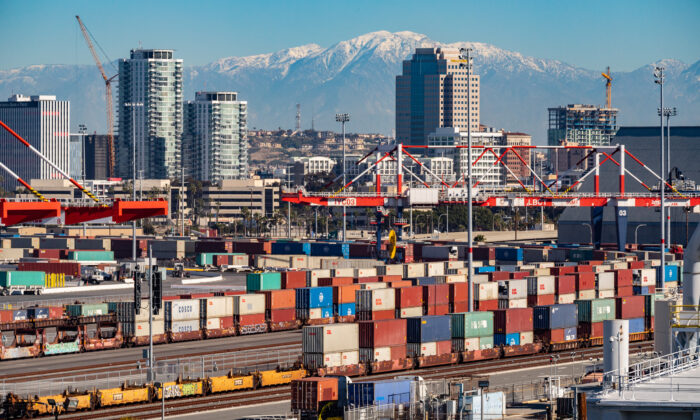 President Joe Biden has signed an executive order creating an emergency board to investigate failed contract talks between the nation’s oldest rail workers union and a dozen carriers threatening to shut down rail shipments on July 15.

“I have been notified by the National Mediation Board that in its judgment these disputes threaten substantially to interrupt interstate commerce to a degree that would deprive a section of the country of essential transportation services,” the president wrote in the executive order on July 15.

On July 12, Brotherhood of Locomotive Engineers and Trainmen (BLET) members, representing more than 57,000 rail workers, approved the national strike by a 99.5 percent margin.

In a statement, BLET national president Dennis Pierce said the strike could begin “in the coming days” to “secure a contract worthy” of consideration.

“Contrary to the self-serving propaganda being spread by the rail carriers, the BLET membership owes no one an apology for voting as they did. I, too, voted with the majority and I applaud them for doing it,” Pierce said.

Pierce criticized the nation’s Class I rail carriers for adopting “slash and burn operating plans” during the pandemic” that he said focused solely on “the bottom line.”

“They created the mess, and they have the power and financial means to fix it.”

Pierce said rail carriers had “only one goal in mind—profits without regard to health, safety, satisfaction or well-being of their employees, customers, or the nation at large.”

“To accomplish their goals, they furloughed or fired a third of their nationwide workforce, forcing the remaining employees to work more.”

Making matters worse, Pierce said rail carriers deployed longer trains without regard for safety concerns and that they continue to shut down the rail networks due to an infrastructure not designed to run longer, heavier trains.

“As the post-pandemic economy started to ramp up, they refused to adequately staff their operations, continually blaming their remaining employees for rail carrier actions that negatively impacted their shippers.

“And if anyone is close to being abused as much as the employees by this business model, it’s the shippers, or as they should be called, the rail industries’ customers.”

The Railway Labor Act requires a 30-day waiting period if both sides fail to negotiate a contract. That period expires on July 18.

The parties will have 30 days to reach a mutual agreement to end the disputes.

He added that contract negotiations “should have been settled years ago,” and in industries not governed by the Act, “they likely would have been.”

“The economic power of a legal strike is never to be abused or taken lightly.

“Ironically, if adopted, our proposals would actually improve the workplace, improve the rail carriers’ ability to hire and adequately staff their operations and, in the end, improve the current railroad supply chain crisis created by railroad management.”

In a July 6 letter to President Joe Biden, U.S. Chamber of Commerce CEO Suzanne Clark urged the appointment of a presidential emergency board to resolve the labor dispute between the Class I freight railroads and 12 rail unions.

Clark said the National Mediation Board’s decision to release the Class I freight railroads and rail unions from mediation presents, “a new challenge to the U.S. business community, which is already navigating a difficult environment.

“And we are now facing uncertainty over the possibility of further disruptions during preparations for the holiday shopping season.

“Any breakdown would be disastrous for U.S. consumers and the economy, and potentially return us to the historic supply chain challenges during the depths of the pandemic.”