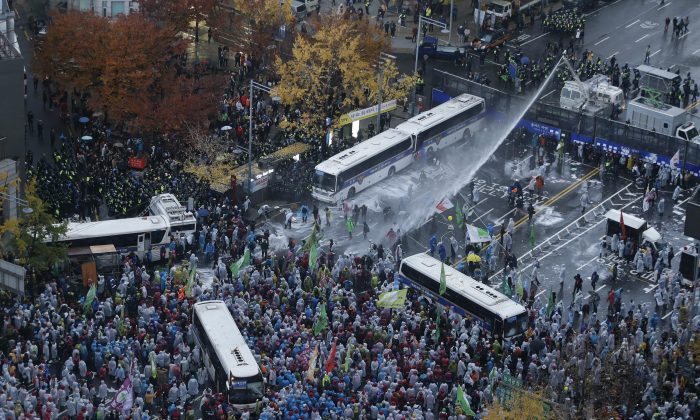 South Korean riot police officers spray a water cannon as police officers try to break up protesters who try to march to the Presidential House after a rally against government policy in Seoul, South Korea, on Nov. 14, 2015. Police fired tear gas and water cannons Saturday as they clashed with anti-government demonstrators who marched through Seoul in what was believed to be the largest protest in South Korea's capital in more than seven years. (AP Photo/Ahn Young-joon)
Asia & Pacific

SEOUL, South Korea—Police fired tear gas and water cannons Saturday as they clashed with anti-government demonstrators who marched through Seoul in the largest protest in South Korea’s capital in more than seven years, leaving a protester critically injured.

About 70,000 people marched from various locations in Seoul to an area near City Hall, according to police. The demonstration stretched into the night, and police detained at least a dozen people. It was not clear how many people were injured.

The marches, organized by labor, civic and farmers’ groups, brought together protesters with a diverse set of grievances against the government of conservative President Park Geun-hye, including her business-friendly labor policies and a decision to require middle and high schools to use only state-issued history textbooks starting in 2017.

Baek Nam-gi, a 69-year-old farmer, remained unconscious at a hospital after he fell down and hit the back of his head as police doused him with water cannons near City Hall, said Cho Byung-ok, secretary general of the Korea Peasants League, an activist group that represents farmers.

Television footage showed Baek lying motionless as other demonstrators struggled to drag him away, as police continued to fire water cannons at them from atop police buses.

Doctors told Baek’s family that his condition was too fragile to attempt emergency surgery, Cho said. An official at Seoul National University hospital said she couldn’t comment on Baek’s condition due to privacy rules.

Demonstrators, many of them masked, carried banners and chanted “Park Geun-hye, step down” and “No to layoffs” as they occupied a major downtown street. Some of them clashed with police, who created tight perimeters with their buses to block them.

Protesters tried to move some of the buses by pulling ropes they had tied to the vehicles, and police, wearing helmets and body armor, responded by firing tear gas and water cannons at them.

Police also fired water cannons from above a portable wall nearby to disperse marchers who were trying to advance. Some protesters fought back by hitting police officers camped on the top of the buses with poles. Others smashed the windows of the buses with sticks or spray-painted anti-government slogans on them.

Police detained at least 12 people for allegedly violent behavior, according to an official at the Seoul Metropolitan Police Agency, who didn’t want to be named, citing office rules. Police said they could not immediately confirm the number of people injured in the clashes.

Earlier in the day, members of the Korean Confederation of Trade Unions, an umbrella labor union, clashed with police who unsuccessfully tried to detain KCTU President Han Sang-goon during a news conference. A Seoul court had issued an arrest warrant for Han over a failed court appearance, after he was indicted for his involvement in organizing a May protest that turned violent.

“If lawmakers try to pass the (government’s) bill that will make labor conditions worse, we will respond with a general strike and that will probably be in early December,” said Han, moments before police moved in and forced him to flee inside a building as his colleagues blocked the officers.

Police said the crowd was the largest at a demonstration in Seoul since May 2008, when about 100,000 people poured onto the streets to protest the government’s decision to resume U.S. beef imports amid lingering mad cow fears.

Labor groups have been denouncing government attempts to change labor laws to allow larger freedom for companies in laying off workers, which policymakers say would be critical in improving a bleak job market for young people.

Critics say that the state-issued history textbooks, which have not been written yet, would be politically driven and might attempt to whitewash the brutal dictatorships that preceded South Korea’s bloody transition toward democracy in the 1980s.

President Park is the daughter of slain military dictator Park Chung-hee, who ruled South Korea in the 1960s and ’70s, and whose legacy as a successful economic strategist is marred by records of severe oppression.

In May, South Korean police detained more than 40 people when protests over the government’s labor policies and the handling of a year-old ferry disaster spiraled into violence, leaving several demonstrators and police injured and many police buses damaged.