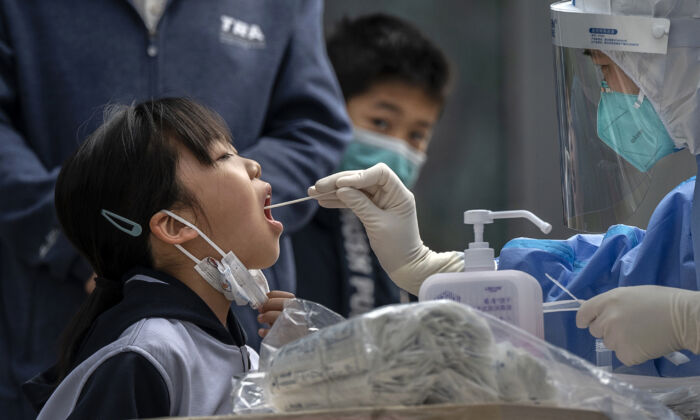 A young girl is given a nucleic acid test by a health worker at a makeshift COVID-19 testing site in Beijing on April 29, 2022. (Kevin Frayer/Getty Images)
CCP Virus

Schools have postponed reopening. Businesses are shut down. Residents line up for a new throat swab.

Once again, dozens of Chinese cities are tightening COVID-19 curbs in the run-up to a major Chinese Communist Party (CCP) meeting next month.

A weeklong lockdown in the metropolis of Chengdu was extended on Sept. 8 after more than a hundred COVID-19 cases were reported. Officials ordered its 21 million residents on Sept. 1 to stay at home while conducting three-day citywide COVID-19 testing. The order has since been extended.

At the Sept. 8 briefing, authorities extended the curbs in most areas as “the risk of community transmission still exists in some regions.” Chengdu, the biggest city to be locked down since Shanghai’s two-month closure, has yet to announce an exit plan.

At least 34 Chinese cities have been placed under partial or full lockdown as of Sept. 5, including seven provincial capitals, according to the health news platform of People Daily, the CCP’s flagship newspaper. These cities range across the country, from northern oil production center Daqing to southern tech hub Shenzhen.

The COVID-19 curbs have disrupted the lives of 291.7 million residents, accounting for 20.7 percent of China’s population, Japanese bank Nomura wrote in a Sept. 6 note. Nomura estimates that 49 Chinese cities had various levels of lockdowns or control measures, which contribute to 24.5 percent of the country’s gross domestic product (GDP).

The widespread shutdown comes as the CCP prepares for its important 20th Party Congress, which is set to open on Oct. 16 in Beijing. At the twice-a-decade party conclave, Chinese leader Xi Jinping will be seeking a record third five-year term in office, and the new top Party leadership will be announced.

While Xi is expected to secure his position, “the rising infections have become the biggest variable of the Party Congress,” according to Chinese commentator Wang He.

“If the outbreak hit Beijing suddenly, could the Party Congress continue?” Wang asked.

Since the start of September, 29 of the country’s 31 provinces have reported new infections, Mi Feng, spokesperson of the national health commission, told reporters at a Sept. 7 press conference.

Facing the challenges posed by the highly-contagious Omicron coronavirus variant, Mi said officials must stick to the regime’s zero-COVID approach “unswervingly.” The stringent policy aims to eliminate any infection among communities through regular testing, mandatory quarantines, and repeated lockdowns.

The official said cities reporting no new infections must implement a “normalized” testing system, implying that residents be tested every few days.

However, health authorities said on Sept. 8 that residents who take trains, planes, long-distance buses, and ferries are required to show proof of a negative COVID-19 test result from the previous 48 hours.

The new curbs will take effect through Oct. 31, covering the major Party gatherings and upcoming holidays.

Authorities urged residents to stay put during the Sept. 10 through Sept. 12 Mid-Autumn Festival and the week-long holiday at the beginning of October.

In Beijing, travel restrictions were already tightened earlier this week. People who have visited county-level administrative divisions with a single confirmed case in the given seven-day period are banned from entering the capital city, a spokesperson for city authorities told a press briefing on Sept. 3.

The costs of sticking to the CCP’s zero-COVID strategy are mounting.

The lockdown of tens of millions of people earlier this year has slashed China’s economy, sending youth unemployment to a record high and prompting foreign companies to shift their investment out of the country. Seeing the latest lockdown, economists further slashed China’s economic growth forecast. Nomura cut the full-year GDP forecast to 2.7 percent on Sept. 6 from August’s 2.8 percent, far lower than Beijing’s target of “around 5.5 percent.”

Still, the seemingly endless lockdown has inflicted pain on residents. In Chengdu, viral videos on Chinese social media show people being barred from fleeing their homes in the aftermath of a 6.8 magnitude earthquake earlier this week.

A woman from Guiyang, where more than half of the city has been locked down since Sept. 5, said many are enduring food shortages in her community. She lives in the community of Huaguoyuan, home to roughly 400,000 residents.

“[The lockdown] was very abrupt, and many didn’t prepare supplies,” she told The Epoch Times on Sept. 8. “We’re in quite a tough situation.”

Petitioners and dissidents claim that officials are using the COVID-19 control measures to keep them out of the public eye so as to not disrupt the upcoming CCP congress.

Yang Jiahao, a man who was detained for more than 400 days after writing and publishing a letter to the Chinese leader in protest of local authorities’ decision on his lawsuit, planned to travel to Beijing on Sept. 5 in the hope of seeking justice.

But the petition was forced to be canceled. He found that his code on the mandatory health surveillance app suddenly turned red in the morning. Yang said he tested negative on Sept. 4 before being summoned by local officials later that day. The red code means that he lost access to everything from public toilets to shops to train stations and faced a mandatory quarantine.

Yang told The Epoch Times on Sept. 8 that he’s currently under home quarantine, although his second test on Sept. 8 still returned with a negative result. He said officials sealed the door with paper and installed electronic alarms to enforce the home quarantine, despite him having little to no food left at home.