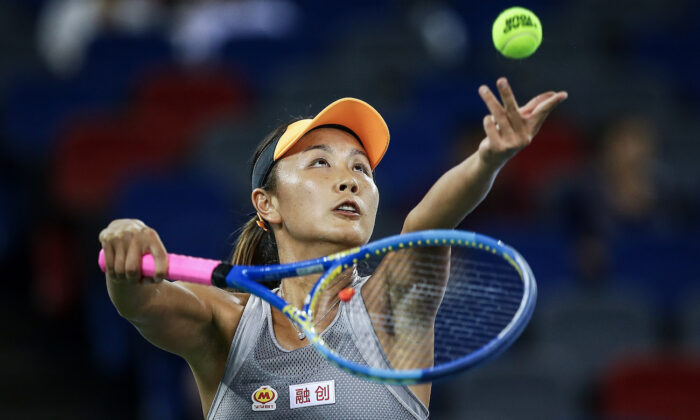 Chinese tennis star Peng Shuai said that her sexual assault claim against a top Chinese official on social media had sparked an “enormous misunderstanding,” in an interview with French sports newspaper L’Equipe published on Feb. 7.

“I never said that anyone made me submit to a sexual assault,” the newspaper quoted her saying. “My private life should not be brought up in sports and politics.”

Peng, 36, also hinted that she doesn’t see herself returning to tour-level professional tennis after multiple knee surgeries. She hasn’t played on the women’s tour since February 2020.

Peng had previously posted on Chinese social media site Weibo that China’s ex-deputy leader, Zhang Gaoli, 75, with the help of his wife, forced her to have sex with him.

Her post was quickly removed from the internet before she disappeared from the public eye for nearly three weeks. Peng was accompanied by Chinese officials in her subsequent reappearances.

Peng’s well-being has since become a matter of concern among the global tennis community and rights groups, with the Women’s Tennis Association (WTA) halting all matches in mainland China and Hong Kong indefinitely.

The format of the interview appeared to allow for no sustained follow-ups, with questions submitted in advance and a Chinese Olympic Committee official sitting in on the discussion, translating Peng’s comments from Chinese.

When L’Equipe asked why the post disappeared from her account, Peng stated that she had deleted it herself.

“This post resulted in an enormous misunderstanding from the outside world. My wish is that the meaning of this post no longer be skewed,” she said.

Peng further refuted that she went missing after making the allegation, claiming that she has always maintained communication with her close friends and the WTA.

“I never disappeared. It’s just that many people, like my friends and among those from the IOC, sent me messages, and it was completely impossible to respond to so many messages,” she said.

The IOC announced on Feb. 7 that its president, Thomas Bach, met with Peng for dinner over the weekend at the Olympic Club in Beijing, with former IOC Athletes’ Commission Chair Kirsty Coventry in attendance.

“During the dinner, the three spoke about their common experience as athletes at the Olympic Games, and Peng Shuai spoke of her disappointment at not being able to qualify for the Olympic Games Tokyo 2020,” the IOC said in a statement.

The IOC noted that Peng would remain in touch with Coventry, and that any further communication about the content of the meeting would be left to her discretion.

However, William Nee of Chinese Human Rights Defenders wrote in a Twitter post that the IOC should have taken the opportunity during the meeting “to get Peng Shuai out of a situation that most likely involves state control” over her liberty.

Michael Shoebridge, the director of defense, strategy, and national security at the Australian Strategic Policy Institute, also criticized the IOC for failing to address Peng’s initial allegation during the meeting.

“This ‘face to face’ stage-managed dinner that doesn’t mention Peng Shuai’s statement about former [Chinese Communist Party] Polituro member Zhang Gaoli sexually abused her is a rolled gold case of the IOC politicizing itself [and] staining its reputation,” Shoebridge wrote in a Twitter post.

Meanwhile, IOC spokesman Mark Adams in his daily Olympic press briefing declined to comment on whether the IOC believes Peng is speaking freely or is under duress.

“We are sporting organization, and our job is to remain in contact with her and, as we’ve explained in the past, to carry out personal and quiet diplomacy, to keep in touch with her, as we’ve done,” he said.

Adams said the IOC can’t pass judgment on whether there should be an investigation of Peng’s initial allegation.

Nicole Hao and The Associated Press contributed to this report.