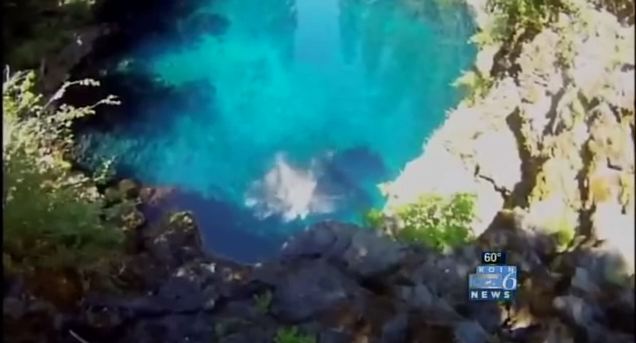 The cliffs at Blue Pool. (Screenshot/KOIN-TV)
US

Tennis player drowns: A 21-year old junior tennis player at the University of Oregon drowned over the weekend.

Alex James Rovello jumped off of a 60-foot cliff into Blue Pool, which is near Eugene, Oregon, reported the Corvallis Gazette-Times. Rovello didn’t surface after jumping, apparently hitting the surface with his face and upper chest.

The Linn County Sheriff’s Office said that several people at the site tried to save him but were unable to, because of how deep the water is and how cold it was.

Deputies found him in about 30 to 40 feet of water.

Rovello finished his high school tennis career undefeated with 50 wins and was the first player in Oregon to win four straight state high school singles titles. He was once ranked 24th in the nation.

Rovello’s mom says “He loved life and all those around him,” with friends ranging at his Portland Tennis club from young kids to grandparents, according to KOIN-TV.

“The Oregon tennis family is devastated by the loss of Alex,” said Nils Schyllander, Head Men’s Tennis Coach, in a statement posted online. “He was an amazing person and teammate and his spirit will live on forever with all of us who were fortunate enough to have known him. Our thoughts and prayers go out to his parents, Geri and Jim Rovello, and to the entire family.”

Rovello’s family is planning a memorial service for May 18th.