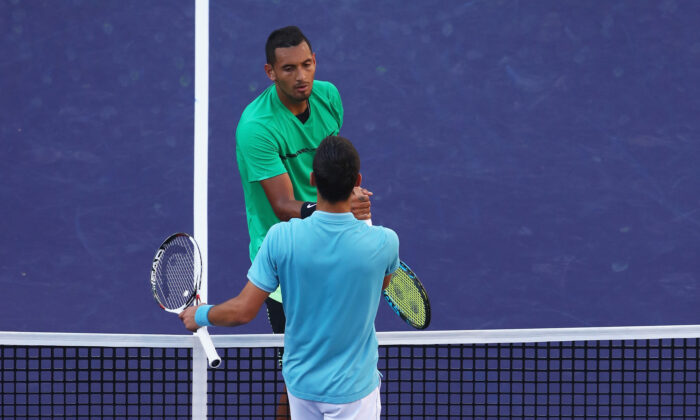 Nick Kyrgios of Australia shakes hands at the net after his straight set victory against Novak Djokovic of Serbia in their fourth round match during day ten of the BNP Paribas Open at Indian Wells Tennis Garden in Indian Wells, Calif., on March 15, 2017. (Clive Brunskill/Getty Images)
Tennis

Australian tennis star Nick Kyrgios once said he could not stand Novak Djokovic, describing him as “a tool.”

Yet, he has now become one of his old foe’s most unlikely and sympathetic backers, declaring that Djokovic hasn’t been treated humanely and that tennis really needs its world No.1 back at the Australian Open.

As Djokovic underwent another night at the immigration detention hotel In Melbourne preparing for Monday’s legal hearing over whether he can stay in Australia and defend his title, he’ll doubtless have been touched, and a touch amazed, to hear of his unexpected new champion.

Back home in Serbia on Saturday, Djokovic’s family held a rally in support of him in Belgrade for the third successive day while Prime Minister Ana Brnabic promised him the full weight of government support over his visa battle to ensure he could enter Australia.

“We’ve managed to make sure gluten-free food is delivered to him, as well as exercising tools, a laptop and a SIM card so that he is able to be in contact with his family,” the PM explained.

So, no surprise there.

Yet more shocking to Djokovic may have been the increasing sympathy he’s received from the most high profile Australian men’s player, Kyrgios, with whom he’s previously appeared to share the frostiest of relationships.

“Honestly, I hope it all gets sorted as soon as possible. For the sport, we need him here, it’s that simple,” Kyrgios said.

“He’s one of the most influential sports people, probably of all-time. If he’s ready to play and he’s allowed to play, I think it’s in a way good for our sport with all this attention.

“His life’s probably hard enough as it is, and I know what that’s like.

“I’m feeling for him now. Like it’s not really humane, is it, what’s going on?”

Djokovic has also found support from his old friend, another former Australian ‘enfant terrible’ Bernard Tomic who, like Kyrgios, said he wished the situation surrounding Djokovic’s visa exemption had been handled very differently.

Djokovic, who is seeking a record 21st grand slam at Melbourne Park, has said in his legal challenge that he’d been given the medical exemption because he had contracted COVID-19 last month.

His plight has become a diplomatic minefield with claims from Serbia that the 34-year-old is being treated like a prisoner, while Djokovic himself appears to have become a poster boy for opponents of vaccine mandates around the world.

Yet Kyrgios reckoned that his apparent enmity with Djokovic had always been blown out of proportion and he praised the Serb for how selfless he’d been when donating thousands of dollars to bushfire victims in Australia two years ago.

“He’s actually helped us, like he’s reached out. He didn’t have to do that. Most athletes wouldn’t, they’re selfish. So I don’t forget that,” said Kyrgios.

And one thing Kyrgios is sure of. If the champion does get cleared to stay in Australia and defend his title, that famed Djokovic stubborn, bloody-mindedness is going to be even more armour-plated.

“If he’s allowed to play, I reckon he’s going to be pissed off,” said Kyrgios.

“He’ll have no problem preparing, this is just all added fuel for him, he’s going to be very determined to play well, and stick it to everyone.

“And I don’t want any bar of that Novak. Someone else can have that task.”