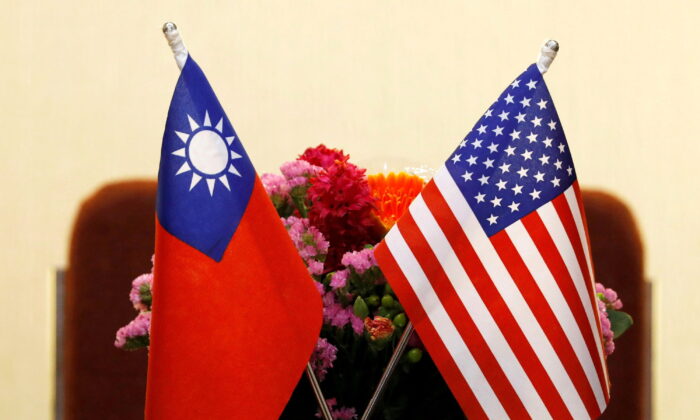 Flags of Taiwan and the United States are placed for a meeting in Taipei, Taiwan, on March 27, 2018. (Tyrone Siu/Reuters)
Thinking About China

Tenney Calls on Washington to End Its Strategic Ambiguity on Taiwan

Rep. Claudia Tenney (R-N.Y.), a member of the House Foreign Affairs Committee, became the first elected official to say that the United States should abandon its policy of strategic ambiguity and declare it will defend Taiwan from Chinese invasion. The statement came on Fox News’ “Sunday Morning Futures” on May 29.

Tenney’s proposal comes amid others. Richard Haass, the president of the Council on Foreign Relations, and David Sacks, a research fellow there, made the case for strategic certainty in September 2020 and reiterated it in December 2021. Writing in 2020, the two speculated:

“Whether the United States could prevail in a Taiwan conflict is no longer certain, and the trend lines continue to move in China’s favor. Unless the United States devotes significant resources to preparing for a conflict in the Taiwan Strait, it stands little chance of preventing a fait accompli. Waiting for China to make a move on Taiwan before deciding whether to intervene is a recipe for disaster.”

While others acknowledge the exigent threat to Taiwan, the Biden administration has been more lackadaisical in Taiwan’s defense. Indeed, the White House has been reactive, nebulous, and inconsistent.

For example, instead of directing immediate, actionable, proactive measures to defend the security of Taiwan, Secretary of State Antony Blinken, speaking of China in late May, said, “We must defend and reform the rules-based international order—the system of laws, agreements, principles, and institutions that the world came together to build after two world wars to manage relations between states, to prevent conflict, to uphold the rights of all people.”

Blinken’s comments were so feckless, oblique, and timid that one could have thought he was speaking at a United Nations anniversary commemoration.

“Strategic ambiguity”—U.S. policy since the Taiwan Relations Act—has become a less potent means for deterring the Chinese regime’s belligerence because of President Joe Biden’s repeated gaffes enunciating the policy. On at least three occasions—August and October 2021 and again just in May—Biden has botched the “ambiguity” portion of the strategy by asserting the United States would defend Taiwan, only to have White House aides retract the comments.

A gambler can’t bet his table stakes to bluff an empty hand at poker, then try to take his money off the table before players show their cards. Your ability to bluff other players in the future will diminish if you do such a thing. You certainly can’t assert a credible bluff if you do it three times.

China is nearly finished building the sealift capacity for a Taiwan invasion. An unverified recording, purporting to be of a leaked classified People’s Liberation Army command meeting on May 14, asserts that China has already gone to a war footing.

“Those who pursue Taiwanese independence in an attempt to split China will definitely come to no good end. No one should ever underestimate the resolve and ability of the Chinese armed forces to safeguard its territorial integrity,” he said. “We will fight at all cost and we will fight to the very end. This is the only choice for China.”

The United States can no longer pretend that the Chinese Communist Party (CCP) has anything other than aggressive, expansionist, belligerent intentions toward Taiwan. Nor can we deny that Taiwan is a vital U.S. interest. The island nation is critical in producing the advanced electronic chips that drive so much of our 21st-century economy, particularly America’s high-tech electronic defense systems.

But the Chinese regime has bullied its neighbors and threatened the Indo-Pacific order for decades. The CCP’s illegitimate nine-dash line and its 2013 expanded air defense identification zone over the East China Sea both attempt to assert sovereign control over the China Seas and upset the global order in the Western Pacific. It is no longer a “strategic competitor” but an adversary. Indeed, communist China is likely an enemy.

Consequently, the United States and China are hurtling headlong toward Thucydides Trap, the principle that a rising power will almost inevitably conflict with existing powers.

The CCP’s belligerence cannot be tolerated.

Writing in his Ph.D. thesis (later published as “A World Restored”), Henry Kissinger observed the following:

“Whenever there exists a power which considers the international order oppressive … relations between it and other powers will be revolutionary. … Diplomacy … cannot function in such an environment. … [But] for powers long accustomed to tranquility and without experience with disaster … a period of stability [will seem] permanent [and] they find it nearly impossible to take at face value the assertion of the revolutionary power that it means to smash the existing framework.”

The CCP aims to “smash the existing framework.” It is the “revolutionary power” bent upon upsetting the international order, at least in the Western Pacific. Blinken’s naive assertion that “diplomacy is the indispensable tool for shaping our shared future” with China is wrong. It assumes, first, that China embraces the status quo and the international framework that permits negotiation and, second, that diplomacy can be used to restrain its belligerence.

Neither assumption is true; both assumptions are dangerous. Indeed, attempting diplomacy with Beijing, given its ambitions to upset the status quo over the Western Pacific, amounts to simple appeasement.

Instead of pursuing diplomacy, the United States and the Quad—the informal grouping of Japan, Australia, India, and the United States—need to create a formal military alliance that fervently and vigorously asserts that it will defend not only Taiwan, but also the freedom of the sea lanes and airspace that Beijing seems determined to assert as sovereign Chinese territory.

Biden and the leaders of the three other democracies must simultaneously establish diplomatic relations, set up their respective nations’ embassies in Taiwan, and deploy their forces in its defense. And they should do so with deliberate speed.