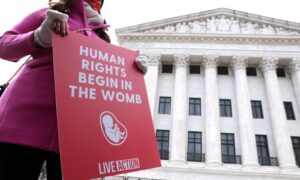 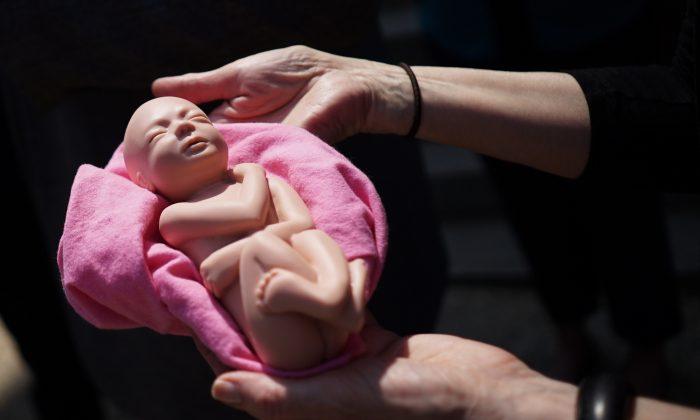 An pro-life activist holds a model of an unborn baby in a file photo. (Mandel Ngan/AFP/Getty Images)
US News

A federal circuit court on Aug. 5 upheld the constitutionality of a Tennessee law that requires doctors to provide pregnant women seeking an abortion with materials about the safety of the procedure and have them wait two days before performing the procedure.

“Tennessee’s 48-hour abortion waiting period is facially constitutional. The law is supported by a rational basis, and it is not a substantial obstacle to abortion for a large fraction of women seeking pre-viability abortions in Tennessee,” Circuit Court Judge Amul Thapar wrote in an opinion.

The decision is the latest development in a decades-long legal saga surrounding the 48-hour rule. The state first enacted the law in 1978, but a federal court blocked it based on a case that predated Planned Parenthood v. Casey, a case in which the Supreme Court upheld a 24-hour waiting period for an abortion.

After the state constitution was amended, Tennessee again enacted a 48-hour law, which required doctors to provide pregnant mothers with certain information, including the age of the child, alternatives to abortion, and the medical risks of abortion and pregnancy. The law included an exception for medical emergencies.

A group of abortion providers sued but didn’t request for the law to be suspended. The statute went into effect in 2015 and remained in force for five years. The plaintiffs alleged that the law was unconstitutional and imposed a burden on mothers seeking abortions.

Thapar noted that while the law was in effect, the level of abortions remained the same in the state, with about 10,000 unborn children aborted every year after the law was passed.

Last year, a district court held a trial and concurred with the plaintiffs, finding that the law was unconstitutional because it imposed an undue burden on women seeking abortions.

Judge Karen Nelson Moore was the only member of the 16 judges on the circuit to dissent with the Aug. 5 decision.

“An honest look at the record compels but one conclusion: a law that peddles in stigma, forces women into unnecessary and invasive surgical procedures, and forces low-income women to sacrifice basic necessities for themselves and their families in order to obtain an abortion is nothing if not an undue burden,” Moore wrote. “I dissent.”