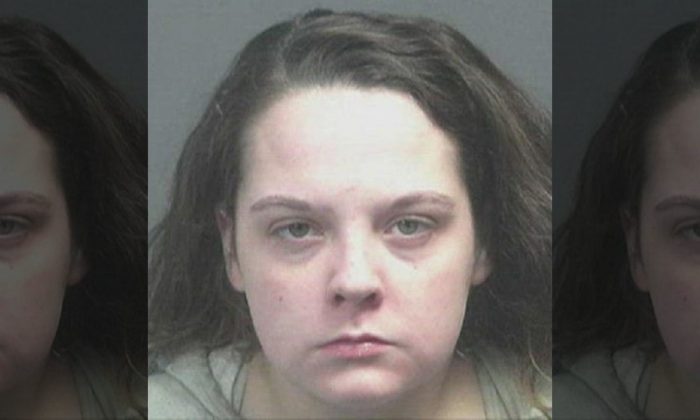 Julia Myers, 22, faces charges of more than 10 offenses, including driving while impaired, and was arrested Monday. (Blount County Sheriff's Office)
Crime and Incidents

A Tennessee woman who was about to get arrested after allegedly leading police on a high-speed chase was captured on camera exiting the car with a beer in her hand, and as the arresting officer readied to slap on the handcuffs, she took a final chug.

Dashcam footage showed an apparently irritated Blount County Sheriff’s deputy taking the can out of the woman’s hand, setting it on the ground, and then booting the beer away.

“What is wrong with you?” one of the deputies can be heard saying in the recent video published by WTHR, as he holsters his gun and steps over the the woman to put on the handcuffs.

Julia Myers, 22, of Maryville, was identified in a Knoxville News Sentinel report as the woman who allegedly chugged a Bud Light beer in front of arresting officers after first leading them on a chase that began near a school.

Blount County Sheriff’s deputies were parked at Montvale Elementary School on Jan. 28 when they reportedly spotted a 2002 Kia Rio at around 1 p.m. driving 60 mph in 45 mph zone. Troopers set off in pursuit, with the Kia allegedly picking up speed.

According to the report, Myers turned on to Willow Pond Drive in Blount County without signaling and then tried to ram police patrol cars head-on.

The video footage begins with officers in pursuit, as the Kia runs a stop sign and turns right, exiting the camera view. As the pursuit car rounds the turn, the Kia again pops up in the frame, but with its back end bouncing up and down in the ditch.

Myers can be seen regaining control of the vehicle and peeling out of the ditch, before accelerating away. She reportedly reached speeds of 56 mph before stopping at a Marathon gas station and flinging open the car doors.

“Show me your hands!” one of the deputies is heard shouting towards the suspect’s vehicle.

“Get out of the [expletive] car now!” the male voice is heard yelling instructions towards the car’s occupants. “Get out now!”

“On the ground! You, on the ground now!” the officer yells, as two male suspects also climb out of the passenger’s side and get down on the ground.

Myers exits the driver’s side, gingerly holding the can of beer in her right hand, before laying down. As the deputy approaches, Myers takes her last drink.

“I didn’t ram you, dude, I swear,” Myers can be heard telling the deputies as she was led towards the cruiser. “I was not gonna ram you,” Myers yells again as the arresting officers place her on the hood of the police car and the footage cuts off.

Myers also reportedly resisted arrest and had to be forced into a patrol car. The Sentinel reported that while Myers was in the car, she kicked the window and threatened to kill a deputy if she ever saw him in public.

Myers has been charged with over 10 offenses, including driving while impaired, felony evading arrest, reckless endangerment, and aggravated assault, the Sentinel reported. She allegedly admitted to drinking and driving, according to the paper. She also allegedly told officers that she started her day by drinking a fifth of liquor at 9:45 a.m. and later switched to beer.

It is unclear whether the two male occupants of the stopped car will face any charges.