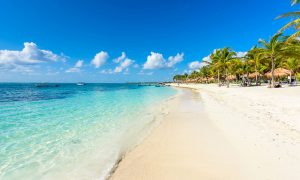 'I Almost Lost My Leg or My Life': Man Gets Flesh-Eating Bacteria at Beach
0
Share Now
TelegramFacebookTweetEmailTellMeWeReddit
Copy Link

She might be missing a chunk of her right thumb, but a Tennessee woman is lucky that she didn’t lose her arm after contracting a flesh-eating bacterial infection when she had a manicure and got a little nick.

Jayne Sharp told WBIR she is still getting back the feeling in her hands, after contracting necrotizing fasciitis in the spring.

She believes the infection took hold in a cut she picked up at a Knoxville nail bar.

“While I was there I got stuck on my thumb and I went ‘ouch’ but I went back to looking at my telephone,” said Sharp.

Later that day, her thumb started throbbing, she felt sick and thought she had come down with the flu.

When a flu test came back negative, the nurse told her to keep an eye on the swelling.

Sharp went home and fell asleep. When she was woken by a call from the nurse, she found the swelling had reached her arm.

She was rushed to the hospital, and diagnosed with necrotizing fasciitis.

“She could have lost her finger or her arm if she hadn’t been diagnosed properly,” said Chaudhuri.

Sharp said that she never imagined that a cut during a manicure could cause the disease.

“I had never heard of such a thing when they told me flesh-eating bacteria,” she said.

Sharp is diabetic, meaning she is more susceptible to the disease.

The nail salon said that they follow state regulations on cleaning tools and that they passed an inspection days after Sharp reported the issue.

Various cases of flesh-eating bacteria have been reported in United States over the last couple of months.

Last month a Florida man passed away after having a quarter of his skin removed in operations to save him from an infection.

Orlando resident David Ireland died on Aug. 29, according to his obituary, just two weeks after he first started to experience flu-like symptoms that were later diagnosed as necrotizing fasciitis.

The family had braced for him to emerge from the infection with hands and feet amputated if he had survived.

The bacteria had entered through an open wound on his leg, Jody Ireland told Fox News. He started to show signs of what they thought was the flu on Aug. 16, with aches and a fever.

Five days later, after he took a turn for the worse, they rushed him to hospital, she said.