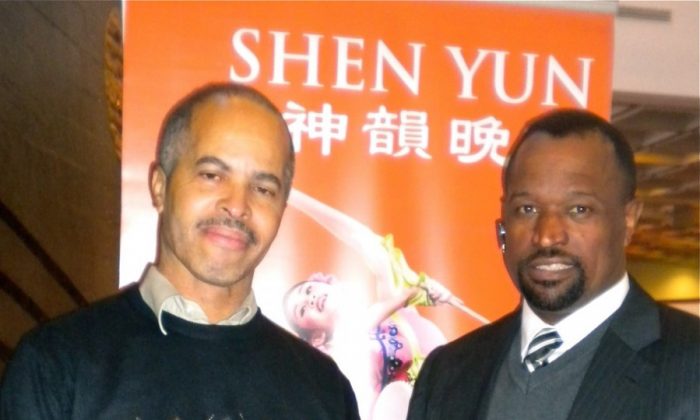 NASHVILLE, Tenn.—The publishers of an influential Black newspaper brought a group of students to see Shen Yun Performing Arts Touring Company on Feb. 25. According to Tennessee Tribune Associate Publisher William Miller, “My kids are grown up, so we look for kids to bring every year, because it’s a great, great thing to do.”

The executive said the director of sales and operations for the paper, James Artis, was a “magic man and miracle worker,” and after the papers’ founder, Rosetta Miller-Perry, thought of the idea of treating students to the performance, Mr. Artis made it happen.

Standing in the lobby of the Tennessee Performing Arts Center (TPAC), Mr. Artis said he loves all cultures, yet sometimes it is hard to bridge the gap between cultures. Sharing Shen Yun with students who might not otherwise have a chance to see it helps bridge the cultural gap. According to its program, New York-based Shen Yun has “a mission to reclaim and renew the true, divinely-inspired cultural heritage of China … They create an all-new production every year that seeks to offer the audience an experience it will always remember.”

“They love it, they love it. They come every year. Last year we had about 20 and this year we have more,” said Mr. Artis. The children seemed very happy during intermission, and watched the show raptly from the best, orchestra seats. Some of the students posed for pictures in front of Shen Yun banners, and two beaming, festively dressed girls presented pens decorated with roses to two reporters after the show.

Mr. Artis responded to the performance as enthusiastically as his young guests. He had seen it twice this year. He said, “I love it, I love it … you just see so many different facets of the show each time that you see it, once you sit there, you allow it to embrace you, it almost brings tears to your eyes to see the performance … so poetically inclined … the energy that’s transformed from the performance to the audience is spectacular.”

Mr. Miller is a musician as well as a publisher. He plays jazz keyboards, and said he was fascinated by the relationship between the dancers and the orchestra, the way they complemented each other.