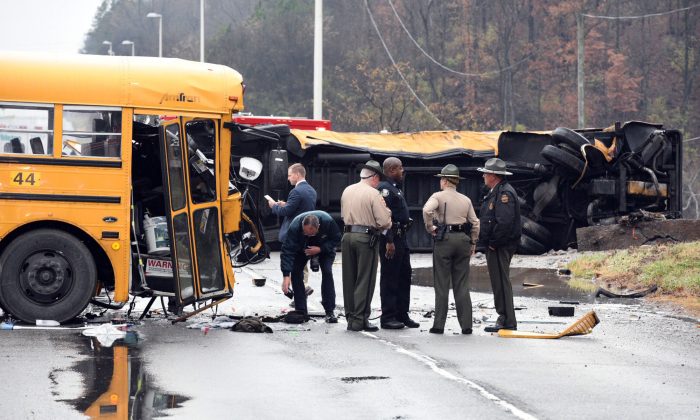 Authorities work the scene of an accident involving two school buses in Knoxville, Tenn., Tuesday, Dec. 2, 2014. Knoxville Police Department spokesman Darrell DeBusk said “several students have been injured and are in the process of being transported to the hospital.” (AP Photo/Knoxville News Sentinel, Michael Patrick)
US

At least three students were dead and about two dozen injured when school buses crashed in East Knoxville, Tennessee.

Reports started coming in about the crash at around 4:35 p.m. ET.

Knoxnews.com published photos showed a bus on its side.

Three patients were transported to the University of Tennessee Medical Center. East Tennessee Children’s Hospital officials told the station they expect about 18 patients.

Other reports said that 20 students were injured and three were killed.

WEATHER UNDERGROUND, For The Associated Press

A cold front will extend from the southern Plains to the Northeast on Monday, while a Pacific system will approach the West Coast.

A strong cold front will stretch across the southern Plains, the lower Mississippi Valley, the Tennessee Valley and the Northeast on Monday. A relatively warm air mass from the Gulf of Mexico will collide with this frontal boundary, producing light to moderate precipitation across the eastern half of the country. There will be a threat of freezing rain over eastern Oklahoma, northern Arkansas, southern Missouri, northwest Tennessee, western Kentucky, southern Illinois and West Virginia. Light rain will be possible over the western Gulf Coast, the lower Mississippi Valley, the Tennessee Valley and the Mid-Atlantic. A mixture of rain and snow will affect the Ohio Valley and the Northeast. In addition, snow showers will linger over portions of the Great Lakes. Bitter cold arctic air will trail this frontal boundary, plunging southward over the northern Plains and the upper Midwest.

Meanwhile, a Pacific system will inch closer to the West Coast, bringing much needed rain to drought stricken areas of central and northern California. High elevation snow showers will develop across the northern Sierra Nevada, while scattered snow showers will be possible over the Great Basin and the Rockies. As cold, arctic air spreads across the Pacific Northwest, a mixture of rain, freezing rain and snow will impact Oregon and southern Washington. Conditions will stay relatively calm across the Desert Southwest on Monday.

Temperatures in the Lower 48 states Sunday have ranged from a morning low of -22 degrees at Bozeman, Mont. to a high of 91 degrees at Yuma MCAS, Ariz.