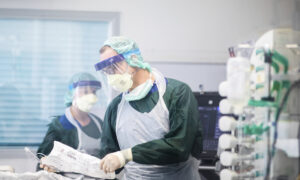 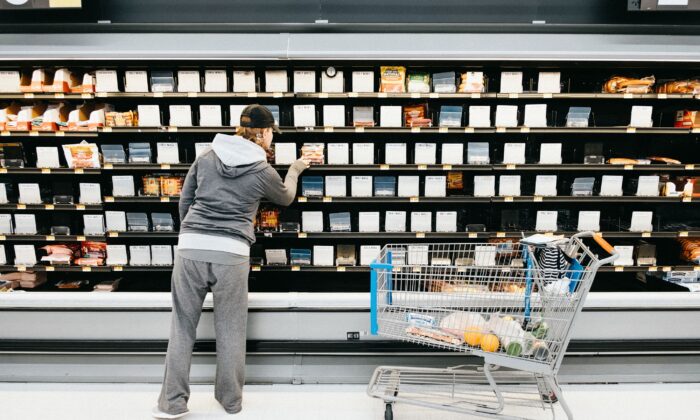 A person shops in front of the empty shelves in the deli section of Walmart Supercenter as concerns grow over the spread of CCP virus in Nashville, Tenn., on March 14, 2020. (Jason Kempin/Getty Images)
US News

Tennessee Residents ‘Must Remain at Home’ Under New Order: Governor

Tennessee residents are the latest to be told to stay at home amid the COVID-19 pandemic, as Gov. Bill Lee issued an executive order against all but essential trips.

COVID-19 is the disease from China caused by the CCP (Chinese Communist Party) virus, commonly known as the novel coronavirus.

Lee on Thursday said that data from the State Department of Transportation and Unacast, a company that tracks cell phones, showed that movement across the state has risen in recent days after decreasing last month.

“While many Tennesseans have made good faith efforts to remain at home, there’s clear evidence that some citizens are beginning to disregard safer at home measures. It’s dangerous, it’s unacceptable, and it’s a threat to lives in our community,” Lee said at a press conference.

The governor updated his previous executive order to clearly require that Tennesseans stay at home unless they are carrying out essential activities, such as getting groceries or picking up medicine.

“April stands to be a very tough month for our state. COVID-19 is an imminent threat. And we need you to understand that staying at home isn’t an option. It’s a requirement for the swift defeat of COVID-19 in Tennessee,” Lee said.

The order will remain in effect until April 14 at 11:59 p.m. It previously ordered the closure of some businesses.

Business owners who decline to close down after being deemed non-essential could face legal measures after receiving warnings, according to state officials.

Tennessee has 2,845 confirmed cases out of the 34,611 tests performed. Thirty two patients have died.

The virus is thought to spread mainly from person-to-person between people who are in close contact with one another (within about 6 feet) through respiratory droplets produced when an infected person coughs or sneezes.

“These droplets can land in the mouths or noses of people who are nearby or possibly be inhaled into the lungs,” according to the Centers for Disease Control and Prevention.

Touching surfaces with the virus on it and then touching one’s nose, eyes, or mouth could be a source of transmission.

Ways to avoid becoming infected include frequently washing hands with soap and water for at least 20 seconds, especially after being in a public place, or after blowing one’s nose, coughing, or sneezing; avoiding crowds and sick people, and wearing a mask and gloves when leaving one’s home.

Symptoms of the CCP virus include fever, cough, shortness of breath, fatigue, aches and pains, diarrhea, and pink eye.

Over 236,000 people in America have been infected, according to Johns Hopkins University, though a number of patients have recovered. About half of the approximately 5,648 deaths in the country are in New York state.

Around four in five patients don’t require hospitalization and will recover at home with rest and symptom treatment. COVID-19 affects the elderly and those with underlying health conditions the most.