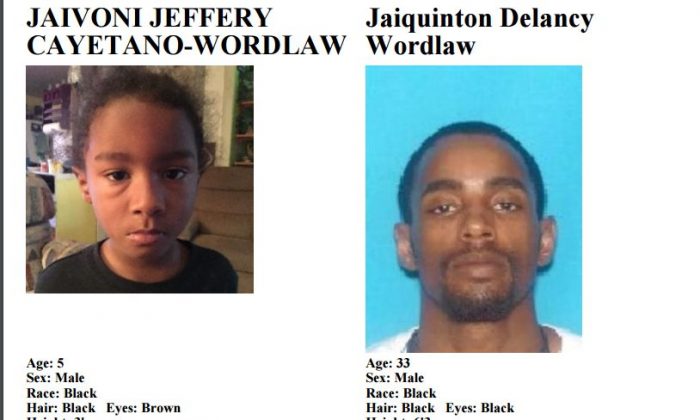 Tennessee Bureau of Investigation
US

Police in Tennessee are looking for a 5-year-old boy who was allegedly abducted.

Tennessee authorities issued an “Endangered Child Alert” for the child, JaiVoni Jeffery Cayetano-Wordlaw. He is 3 feet tall and weighs around 40 pounds and has black hair and brown eyes. He was last seen wearing blue pajamas.

His non-custodial father, Jaiquinton Delancy Wordlaw, is believed to have abducted the boy, according to authorities. He is wanted for a probation violation in Jefferson County, Tennessee, WHNT reported.

Officials said he might be armed with a semi-automatic handgun.

The child was taken from Coopertown, Tennessee, located approximately 30 miles northwest of Nashville.

The Tennessee Bureau of Investigation said that anyone with information should call 1-800-TBI-FIND.

According to a TBI bulletin on Dec. 8:

A Middle Tennessee Endangered Child Alert has been issued for the Coopertown Police Department for 5 year-old JaiVoni Jeffery Cayetano-Wordlaw. He is a black male, 3′ tall, 40 lbs, brown eyes and black hair. JaiVoni was last seen at his residence wearing blue pajamas.  He was taken by his non-custodial father, Jaiquinton Delancy Wordlaw. Woodlaw is wanted for probation violation out of Jefferson County, Tennessee and has a lengthy and violent criminal history. He may be armed with a silver semi-automatic handgun.  If you have seen JaiVoni or the suspect, please call the Coopertown Police Department at 615-382-4470 or the TBI at 1-800-TBI-FIND.