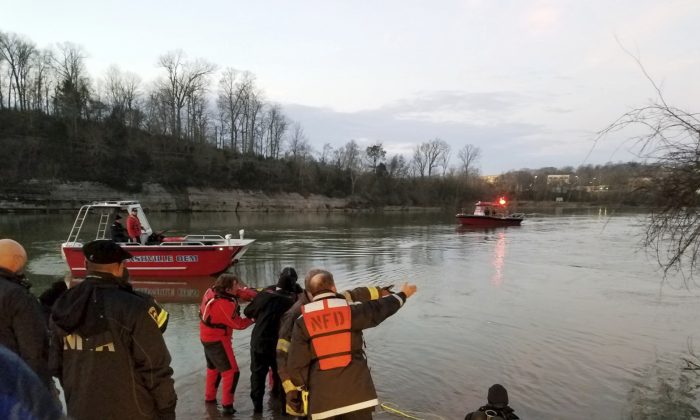 Tennessee Officer Dies in River After Trying to Rescue Woman

NASHVILLE, Tenn.—A Metro Nashville police officer died Thursday after slipping into the swift currents of the Cumberland River while trying to get a suicidal woman out of a car that was quickly heading into the bitterly cold water, Tennessee officials said Thursday.

The Metro Nashville Police Department confirmed “with heavy hearts” in a tweet around 8 a.m. that a fire department diver found the body of 44-year-old Eric Mumaw. Police said Mumaw was an 18-year veteran of the department, “who gave his life this morning in service to Nashville.”

“I know he died doing what he loves. He loved his midnight shift and he gave his life,” Police Chief Steve Anderson told The Tennessean.

Nashville Mayor Megan Berry said in a statement that “our worst fears were realized” with the officer’s tragic death. “Officer Mumaw dedicated his life to the safety and protection of us all, and today he gave his life to that calling.”

Police spokesman Don Aaron said during a news conference earlier Thursday that two officers were responding about 4:30 a.m. Thursday to a call about a 40-year-old woman who relatives said was contemplating suicide.

He said they found the woman in a car on the boat ramp near the water’s edge. Aaron said it appeared that she was about to get out of the car to go with officers when the vehicle went into gear and rolled down the ramp, which ended abruptly under the water.

“The two officers as the car was rolling tried to make heroic efforts to save the woman who was in the vehicle,” Aaron said, but both officers slipped into the river. One was able to get back to the bank. Aaron said that officer tried to grab Mumaw but was unsuccessful.

He said crews found the woman from the car about an hour later on the riverbank and she was taken to a hospital for treatment.

“It’s extremely dangerous for anybody to be in that kind of a situation,” he said.