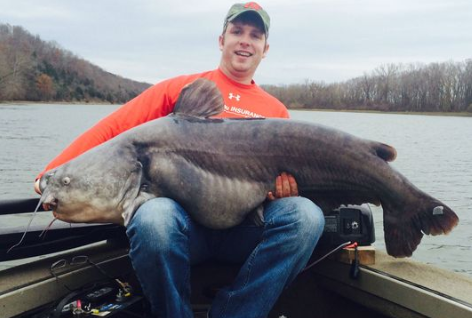 Tennessee Fisherman Was Close to Giving Up, Then He Hooks a Massive Fish…

Tyler Schmid and his friend Dave Plowman were close to calling it quits on a slow fishing day in Tennessee when a massive fish suddenly bit the bait.

“We were probably within 30 minutes giving up and all of a sudden that rod point just went straight down,” Schmid told the Tennessean. “And the fight was on.”

The fight lasted almost 10 minutes before Schmid was finally able to drag the 90-pound blue catfish out of the Cumberland River and into their boat.

The fish measured 51 inches in length and 37 inches in girth. It was nearly a state record, but didn’t quite reach the 112-pound blue catfish caught in 1998.

“I was worried that the pole would break. It pulled a lot of drag and pulled the pole down in the water. That’s why I had to take my time,” Schmid added to WKRN. “It was one of the highlights of my outdoor life for sure.”

“That’s just a scientific guess because we haven’t looked at a lot of catfish that are that big; we just don’t see that many,” Wilson said. “It is very unusual to see those big fish like that; people don’t usually catch them that big. We do know it has had to live a long time to get that big.”

After taking pictures with the fish, he decided to release it back into the water.

“A fish that old, approximately 30 years old, it took a long time for him to get that big,” said Schmid. “And it would be a shame to keep the fish just for pictures. So we released him to let him swim another day and hopefully catch him again.”