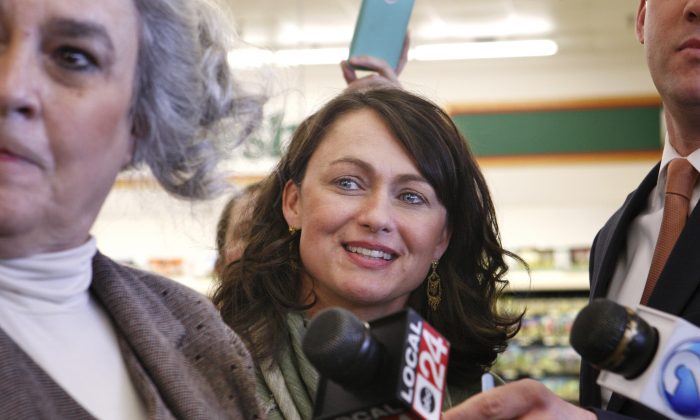 Dana Naifeh, center, one of the owners of Naifeh's Grocery in Munford, Tenn., attends the announcement Thursday, Jan. 14, 2016, that one of the winning Powerball tickets in Wednesday's record jackpot drawing of $1.6 billion was sold at the store. (AP Photo/Karen Pulfer Focht)
US

MUNFORD, Tenn.—A Tennessee couple went on NBC’s “Today” show on Friday and claimed they have one of the three winning Powerball jackpot tickets.

John and Lisa Robinson appeared in NBC’s studio and showed a ticket that had the winning numbers from Wednesday night’s record $1.6 billion drawing. The Associated Press could not immediately verify their claim. There have been other hoax claims in the wake of the world-record jackpot and lottery officials have so far not announced any official winners.

John and Lisa Robinson told “Today” that their attorney advised them to go on national TV first as a way of controlling the story. Lawyers who have represented lottery winners in the past said jackpot winners become targets when their identities are revealed and they are sometimes harassed or get talked into bad investments.Winners are also advised to talk seriously with experts in tax law, financial planning, privacy, security and other safeguards before they become known around the planet.

John Robinson said he was nervous after revealing his identity on the “Today” show.

The winners bought their tickets in the small working class town of Munford, Tennessee; in the quiet Los Angeles suburb of Chino Hills; and at a supermarket in affluent Melbourne Beach, on Florida’s Space Coast.

They overcame odds of 1 in 292.2 million to land on all the numbers. They can let their winnings be invested and thereby collect 30 annual payments totaling an estimated $533 million, or take their third of $983.5 million in cash all at once.