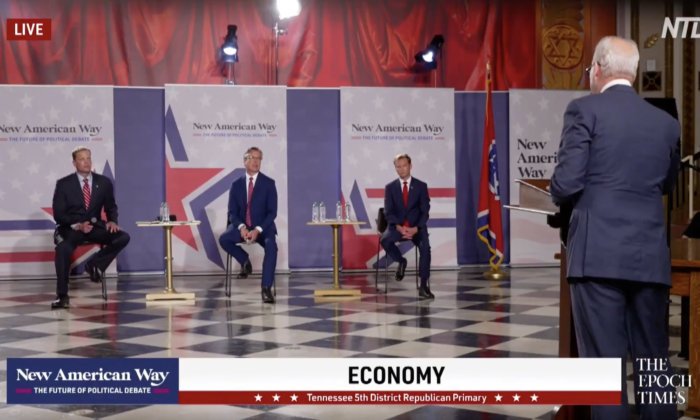 Perhaps I’m being self-serving here, or Epoch Times-serving, but good reason exists to believe the new-style debate in the Republican primary in Tennessee’s 5th Congressional District—which allowed viewers to be truly informed on key issues—is the reason for the results of that election on Aug. 4.

It was that debate—about which I have written before, as some readers will recall—that was the first anywhere, to our knowledge, to use domain (subject matter) experts like Gordon Chang, Hans von Spakovsky, Carol Swain, and Jeffrey Tucker to ask the questions in lieu of the often—actually, usually—biased reporters.

Judging by the many comments on my articles and on the live stream, the audience seems to have appreciated this novel and ideally more instructive approach we were testing—their intelligence, for once, was not being insulted.

Some five hundred came out to attend personally—vastly more than any other debate in the Metro Nashville area. The Epoch TV Livestream of the debate—called A New American Way–The Future of Political Debate—garnered over 51,000 views across the country.

The three leading Republican candidates in this congressional district, it was widely and correctly assumed, were Andrew Ogles, Beth Harwell, and Kurt Winstead. The election was said to be a toss-up between Harwell and Ogles with Winstead not out of the picture because he was lending himself a considerable sum for the campaign. Indeed both Harwell and Winstead were better funded than Ogles, though he had his backers.

All three leaders were invited to participate in the debate as well as two others, Jeff Beierlein and Tres Wittum. (To have accommodated all nine candidates in this format would have been impossible.) Winstead, after assuring us personally he would appear, backed out at the last minute. Bluntly, he lied to us.

Harwell, an experienced politician and the former Speaker of the Tennessee House as well as a director of the vaunted Tennessee Valley Authority (TVA), never told us she wasn’t coming, but dithered instead, obviously conflicted.

It was clear—in fact, we knew—she was getting contradictory advice, local friends telling her to participate and her hired-gun political consultants in D.C. advising her to sit it out, as they conventionally do. She was too far ahead. Ultimately she went with the “pros” and demurred. It may be when you have paid a lot for things, you think you have to go along with their advice. (For the record, I think Harwell, who spent several years teaching an advanced political science program at Middle Tennessee State University, would have done perfectly, possibly exceptionally, well at the debate.)

Who was right? The most recent and near-complete tally tells the story. Former Maury County Mayor Ogles’s victory by over 10 percent in a field of nine was far better than expected. I was hearing all over that this election would be a one- or two-point squeaker.

Now, I don’t attribute this solely to him showing up debating the key issues at the debate, but it certainly played a great part in such a spread. Ogles handily won the straw poll of those in attendance. There was also the usual, often unpleasant, campaign flotsam and jetsam, including endorsements, advertising (often negative), infusions of money (with strings?), and so forth. You have to include all that somewhere, but the debate remains something that never happened before anywhere.

The motivation behind The Epoch Times debate was never isolated to the 5th Congressional District of Tennessee but, as we never ceased to repeat, as a pilot or beta for possible future debates across our country. These results lend credence to the thought we might just have been on to something.

If you’ll excuse me, once more, the self-promotion—okay, wife promotion in this instance—all began in the Simon-Longin household, when my wife, Sheryl Longin, first vice-president of the Nashville Republican Women, had the thought of replacing journalists in our tiresome and biased debates with experts who might actually know something. Yes, they could be biased too but, properly selected, their allegiance to the truth would likely prevail.

I thought this was a great idea, but wondered aloud if anyone would ever possibly do such a thing, logical as it may have been. Then I realized I worked at the one place that would—The Epoch Times. So I picked up the phone and called senior editor Jan Jekielek and the rest—after the usual twists and turns and last-minute freakouts endemic to television production—is history.

Did we do it perfectly? Not even close. How could we? Me, especially, as moderator. It was a beta. And the next and the next will be betas also, as far as the eye can see. (An argument can be made that life itself is a beta, but I’ll spare you that.)

Still, kudos to all those involved in this pioneering effort with special mention to the Young Republicans of Davidson and Williamson counties who one-upped their stodgy elders, combining forces with the Nashville Republican Women and the excellent Epoch Times technical staff to stage the event.

Big winners in the 5th: The People (for once).

Are we ready for the next debate?