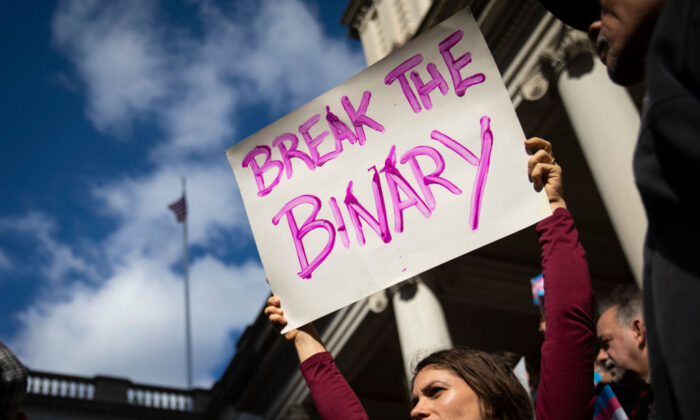 Activists rally to support transgenders on the steps of the City Hall, in New York, on Oct. 24, 2018. (Drew Angerer/Getty Images)
Social Issues

A Tennessee bill proposes to restrict children’s access to hormone therapy, puberty blockers, and other medical procedures that would allow for an alteration to their gender.

House Bill 2835, or the Youth Protection Act, would specifically prohibit a child who hasn’t reached puberty from getting hormone therapy or other gender alterations, such as surgeries, even if parents approve. If they have reached puberty but are still a minor, they must get parental consent.

“We have age restrictions on our youth for a number of different reasons that are there to protect them,” Tennessee state Rep. John Ragan, a Republican, told The Epoch Times. “These protections are multifaceted and across the board.”

The bill makes it illegal to perform procedures that would “facilitate the minor’s desire to present or appear in a manner that is inconsistent with the minor’s sex.”

“Scientifically, at a cellular level, one is either male or female,” Ragan said. “There’s no denying that, aside from some genetic malfunctions. But what some have decided is that what’s between their ears should conquer reality. The reality is that’s not true.

“One can identify as a bird, but when they step off the top floor of a building, they aren’t going to fly. The laws of physics will operate on them, regardless of what they think.”

Once someone is over 18, that person can choose whether to accept reality or not, but while a child is growing and exploring different ways of existing in the world, committing to making a permanent medical alteration “is not the smartest thing to do,” he said.

“There are claims that this reduces suicide rates, but as someone who’s earned a living with statistics, the statistics I’ve seen tell another story,” he said.

‘A Higher Risk of Suicide’

Ragan shared one study that examined 324 sex-reassigned persons (191 male-to-females, 133 female-to-males) in Sweden that concluded that people “with transsexualism, after sex reassignment, have considerably higher risks for mortality, suicidal behavior, and psychiatric morbidity than the general population.”

In a 2004 Guardian article, the Birmingham University Aggressive Research Intelligence Facility (ARIF) assessed the findings of more than 100 follow-up studies of post-operative transexuals.

ARIF concluded that none of the studies provided “conclusive evidence that gender reassignment is beneficial for patients.”

The function of childhood is to carry space for change, Ragan said.

“Children want to be many different things when they are growing up and many of them are unrealistic, but it’s a part of their imagination,” Ragan said. “However, when they insist a body alteration to go along with their mental picture, it’s going a step too far.”

The measure is being proposed as transgender legislation takes many different forms across the nation, such as in Texas, where Gov. Greg Abbott has directed state agencies to investigate reports of transgendered children receiving gender-affirming care as child abuse. This followed an opinion (pdf) issued by Texas Attorney General Ken Paxton in which he classified gender-affirming treatment for transgendered youths such as hormone therapy, puberty blockers, and other procedures as forms of child abuse.

Ragan also has sponsored another measure making its way through the state legislature that would prohibit males from participating in female sports.