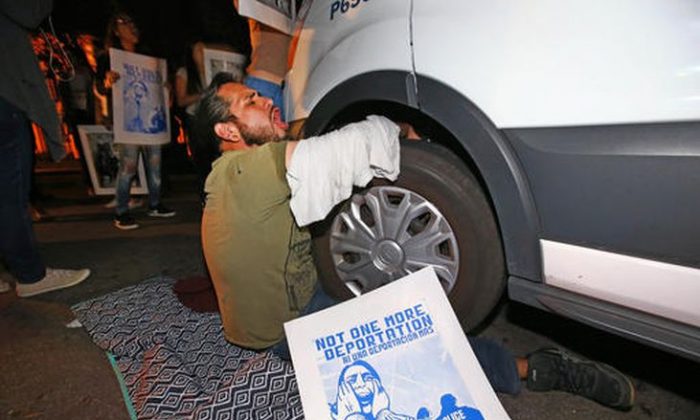 A protester locked himself to the van carrying Guadalupe Garcia de Rayos that is stopped by protesters outside the Immigration and Customs Enforcement facility, Wednesday, Feb. 8, 2017, in Phoenix. Apparently fearing her deportation, activists blocked the gates surrounding the office near central Phoenix in what the Arizona Republic says was an effort to block several vans and a bus inside from leaving. Police arrested several protesters Wednesday night after they blocked enforcement vans. (Rob Schumacher/The Arizona Republic via AP)
US

A proposed bill in Tennessee is aiming at protesters who block traffic.

The bill, proposed by state Republican Senator Bill Ketron stipulates that if a person is blocking traffic during a protest or demonstration, if they’re hit, they won’t be able to file a lawsuit against the driver in a civil court for their injuries.

Specifically, the bill would provide civil immunity in court if the driver was exercising “due care,” leading up to the victim’s injuries. However, the bill doesn’t define what “due care” entails.

“We believe that citizens have the right to protest,” Ketron said in a statement, ABC News reported. “There is a procedure for peaceful protests and the purpose of that process is to protect the safety of our citizens. Protestors [sic] have no right to be in the middle of the road or our highways for their own safety and the safety of the traveling public.”

The bill, introduced last Wednesday, would not provide immunity from criminal prosecution.

Personal injury lawyer Tony Seaton told local station WYCB-TV that there would be a limited set of circumstances where drivers would be protected.

The bill proposal comes after a rash of demonstrations against President Donald Trump broke out across the United States after he was elected and after he took office on Jan. 20.

“When people get aggressive, then the peaceful assembly [right] protected in the First Amendment disappears,” he added.