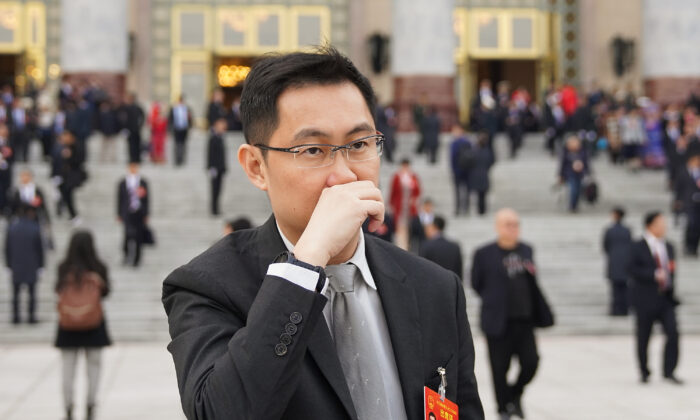 At the company’s earnings conference, Tencent President Liu Zhiping said that new employee recruitment will slow down this year, while Tencent founder, chairman and CEO Pony Ma, reminded employees that they need to prepare for “the winter time.”

Mike Sun, an investment strategist in North America and an expert on China issues, told The Epoch Times that due to the Chinese Communist Party’s (CCP) regulatory policies, internet companies listed on the U.S. and Hong Kong stock exchanges met their Waterloo moment last year. Tencent Holdings was no exception. Its stock on the Hong Kong stock exchange fell to HK$400 (about $52) in late August of 2021, and dropped below HK$300 (about $39) last week.

In April 2017, Tencent became one of the world’s top 10 companies by market value. However, affected by the CCP’s regulatory policies, its business began to decline in the second half of 2021 and the company fell out of the top 10 list in September. In February this year, with the rebound in market value, Tencent re-entered the list of the world’s top 10, taking 10th place.

Tencent has since been focusing on increasing its overseas market share. International games revenue in the fourth quarter came in at 13.2 billion yuan, up 34 percent year-on-year.

Although its overseas market performance was impressive last year, its domestic game revenue increased by only 1 percent in Q4 year-on-year, while showing a negative growth of 12 percent versus Q3.

Citing insiders, Reuters reported in mid-March that Tencent plans to reduce its workforce in some of its business units this year, including a 10 to 15 percent cut in divisions overseeing video streaming and search functions.

At the latest earnings conference, Tencent President Liu Zhiping did not respond directly to the question of whether there will be layoffs, but he mentioned that the total number of employees will grow in 2022, non-core businesses will be streamlined, and new employee recruitment will slow down.

Chinese media The Paper quoted Tencent’s employees as saying that some business divisions are indeed being streamlined, but not all divisions are laying off employees, and some positions are still recruiting new employees.

Pony Ma talked about how to prepare for “the winter time” at the conference. He said that there are two considerations. One is to adapt to the changes in the external environment, taking specific approaches such as “reducing cost and improving efficiency,” and that “bullets are to be used in key battles.”

The second is to strengthen internal cooperation, rather than struggling alone. For instance, the three major office efficiency products under Tencent Group, including its enterprises WeChat, Tencent Documents, and Tencent Conference, will be integrated in the future.

It is worth mentioning that although both Tencent and Alibaba were hit by Beijing’s regulatory storm, the severity for Tencent was much less than Alibaba Group’s huge fine of up to 18.228 billion yuan ($2.78 billion) on the grounds of violating antitrust laws.

Sun explained that Alibaba’s founder Jack Ma “likes to challenge the CCP and acts in a high-profile.” In comparison, Pony Ma proactively fawns on the CCP, and is very low-key. These are key reasons for why Tencent was able avoid a bigger blow, Sun said.

It is well known in China that Ma has made various gestures to please the CCP. In June 2018, Ma and JD’s boss Liu Qiangdong went to Yan’an, the birthplace of the CCP, to take a “ideological class,” posting their pictures while wearing the CCP’s Eighth Route Army uniform. At the end of last year, Ma said at the staff meeting that Tencent is just an ordinary company, which can be replaced at any time. If it is replaced, Tencent will still do well at what it is supposed to do, and will not attempt to regain its dominance position.

Despite this, Sun believes that Tencent’s growth prospects are bleak under the CCP’s continued regulatory pressures and the accelerated outflow of foreign capital from China and Hong Kong.