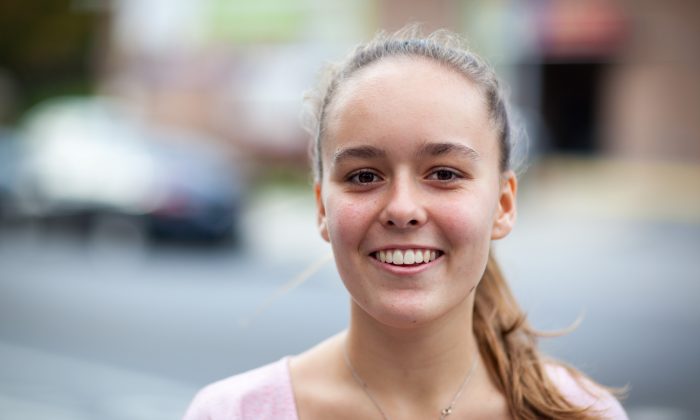 NEW YORK—Alison Collard de Beaufort has been through some difficult years. Just when she started eighth grade in 2013, her friend Sammy Cohen Eckstein, 12, was struck and killed by a van on his way home from school. “It was very devastating,” she said. “Everyone was crying.”

Nine months later, another schoolmate, Joie Sellers, 12, was killed by a hit-and-run driver. Students poured out their sentiments on social media; Instagram was filled with memorial photos.

Summer break passed and Collard de Beaufort started at Brooklyn Technical High School. Not even three months into the school year, a fellow freshman, Mohammad Uddin, 14, was killed in another hit-and-run incident.

“I was mad,” she said. “I wanted people to start paying attention.”

And so she started to send out emails to connect with leaders in her community. Her local council member, Brad Lander, responded, as did the principal from her old middle school, M.S. 51 in Park Slope. After talking to them, she founded the Vision Zero Youth Council, a youth organization to educate children about pedestrian safety.

Vision Zero is a Swedish initiative to reduce all pedestrian fatalities to zero, based on the concept that streets should be engineered to account for human error. New York City Mayor Bill de Blasio kicked off his Vision Zero initiative in 2014, clamping down on traffic violations, redesigning streets, and running an education campaign.

The city’s initiative “invites every New Yorker to join the public conversation on street safety,” its website states, and that’s exactly what Collard de Beaufort wanted.

She wanted to raise awareness on a large scale. But the path forward was not easy.

She remembered one meeting at M.S. 51 where only her younger brother showed up. At another, hosted at Brooklyn Tech, 12 people came. But the majority were adults, “which was disappointing since the Youth Council is meant for students,” she said in an email. “At this point, I wasn’t sure if people were still interested.”

Still, she pressed on.

“I kept going, and persevering paid off!” she said. “More people started attending, and it just showed me that quitting won’t get you anywhere—to make a change, you have to push through everything.”

During her sophomore year, she entered the Samsung Solve for Tomorrow contest with a few schoolmates. Their idea was to create a mobile app that would warn users when a car is approaching. Recognizing the sound of a vehicle and analyzing the frequency, the app would measure whether the oncoming car is speeding.

They put together a beta version of the app and won one of the five top national prizes and $120,000 worth of equipment for their school.

The problem was, the app was only half-finished. It could recognize cars, but it couldn’t tell the speed and distance. Coding at that level was beyond their abilities.

Yet again, Collard de Beaufort didn’t give up. She contacted Samsung and asked for help. “They were very willing to help us,” she said. She hopes the app will be ready by the end of the year.

Perhaps even more importantly, her story attracted more than a dozen media reports, helping to spread her message.

Now 16, Collard de Beaufort is working to establish the council as a student organization at Brooklyn Tech—all while keeping her grades up and, soon, applying to college. She said she will continue her advocacy work through college.

“So many people are dying unnecessarily, tearing families apart. If I don’t do my part in trying to prevent these deaths, then who will?”

Reacting to a negative experience by helping others is not just a sign of strong character, but also a good way to deal with trauma, experts say.

An altruistic activity, such as volunteer or advocacy work, can give one a feeling of control over the situation and give meaning and value to the traumatic experience.

“When you’re feeling so helpless, when you can go and help someone else, it can be a good antidote and a way to help yourself,” said Robin Goodman, clinical psychologist and child trauma expert.

The majority of people, especially young children, may not be able to turn their attention to others after a traumatic experience, at least not right away. “[They are] learning just how to survive the trauma,” said Elaine Ducharme, adjunct professor in psychology at the University of Hartford and expert on trauma.

But psychologists still encourage people to find something positive to do. “Connect with people, talk about the positives in your life, eat well,” Ducharme said.

While some people turn a bad situation into a good one through activity, for others, including children, the change may be more internal. They may become more caring and compassionate after understanding what a traumatic situation feels like, and sometimes they may find a new connection to spirituality, Goodman said.

“The capacity to turn one’s attention to helping others and the welfare of others in the face of a devastating experience is a tremendous sign of resilience and maturity,” said Steven Gold, psychology professor and director of the Trauma Resolution and Integration Program at Nova Southeastern University.