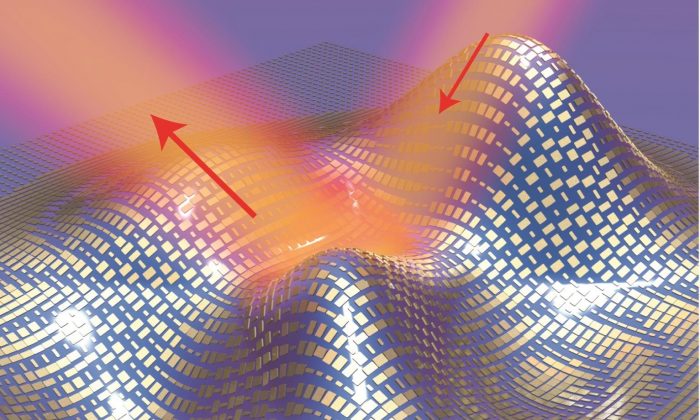 A new invisibility cloak can hide objects using an ultrathin layer of nanoantennas that reflect off light. Are humans next? (Courtesy of Xiang Zhang group, Berkeley Lab/UC Berkeley, CC BY 4.0)
Science

Ten Years On, Invisibility Cloaks Are Close to Becoming a Manufacturable Reality

Invisibility has long been one of the marvels in science fiction and fantasy—and more recently in physics. But while physicists have figured out the concept for how to make invisibility cloaks, they are yet to build a practical device that can hide human-sized objects in the way that Harry Potter’s cloak can.

Objects are visible to the human eye because they distort light waves according to their shape. We see the objects by registering these distortions when the light from the objects hit our eyes. In a similar way an object can also be visible to a radar, which transmits radio waves or microwaves that bounce off objects in their path.

So far, most invisibility cloaks are made from engineered materials that can bend light in a way that manipulates the eye—or another device such as a radar. However, these typically only work for tiny objects. But that may be about to change. A new experiment has created a cloak that, for the first time, can hide small objects of any shape completely from visible light. The cloak, which is thinner and more flexible than any of its predecessors, can also be scaled up to hide bigger objects—potentially transforming the science into something that can be manufactured and sold.

The first invisibility cloak was created in 2006 by British scientist John Pendry. It consisted of a material that could bend microwaves, but not visible light, around a tiny, 2D object measuring just a couple of micrometers—making it look like they had traveled straight and never touched the object. Since then, better versions that work for other wavelengths in both two and three dimensions have been created.

Nearly all of these cloaks rely on the use of metamaterials, which are a class of material engineered to produce properties that don’t occur naturally. They typically have small internal structures built out of glass, metal, or plastics or dielectrics, electrical insulators loaded with nanoparticles. In this way they can be made to interact with light in unusual ways. However, these are generally bulky and can be hard to scale up.

Another problem is that it is difficult to make invisibility cloaks conceal light completely. If there’s just a little bit leaking out the hidden object can’t be completely invisible.

The new cloak is more sophisticated than past devices. It is ultra thin and able to conceal a small three-dimensional object measuring 36 by 36 micrometers by completely reflecting a wavelength of visible light, which has not been done before. And perhaps the most important feature is that the technology could be scaled up to hide bigger objects.

The downside? It only works for light at 730-nanometer wavelength, which is visible light near the infrared part of the spectrum. While this could be useful to hide things from specific devices, such as radar, it would have to be improved to scatter lights from all wavelengths on the visible spectrum to be able to hide from the human eye. While we are still some way away from doing this, we are getting closer.

The cloak hides objects by wrapping them in layer of gold nanoantennas—only 80 nanometers thick. The antennas in the cloak manipulate the light as it hits the object in a way that makes it look like it’s bouncing off a flat surface instead—making it impossible to see the geometry of the object.

The technology of invisibility cloaking has many potential uses, ranging from military applications to bio medicine, computing, and even energy harvesting.

For example, it could be used to render an aircraft invisible from radar. Stealth aircraft, which have been built to avoid detection by radar, are thought to have first been produced in Germany during World War II and use a number of technologies that reduce reflection and emission of light. The cloak can be also used to isolate closely placed antennas, which eventually reduces the footprint of antenna arrays and makes future communication systems extra compact.

Meanwhile, the U.K. QUEST project led by Queen Mary, University of London, to come up with new ways to manipulate electromagnetic fields, has challenged the fundamental physics of thin absorbers, which can dissipate unwanted incoming waves, by combining graphene with metamaterials to develop “stealthy” wallpapers to create wireless-secure environments, reduce the interference of handheld devices, and reuse the radio to increase mobile communication capacity.

With so many important applications, it is surely just a matter of time before the cloaks get better and more practical. With the help of ever-emerging advanced manufacturing tools, 10 years on, the future of invisibility is coming into view.

Yang Hao is a professor of antennas and electromagnetics at Queen Mary University of London. This article was previously published on TheConversation.com