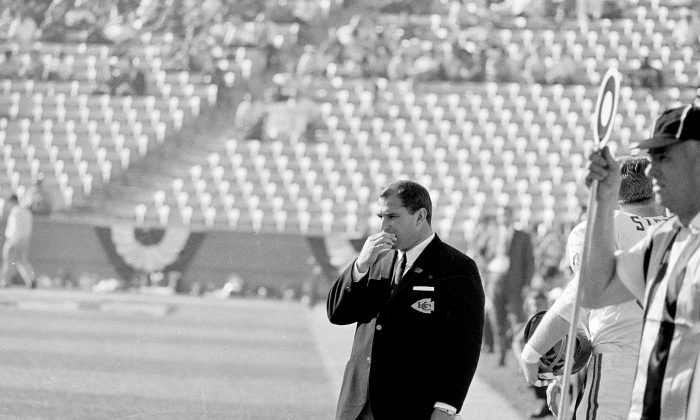 Coach Hank Stram of the Kansas City Chiefs suffers through his team's 35-10 loss to the Green Bay Packers during Super Bowl I at the Los Angeles Memorial Coliseum in Los Angeles, Calif., Jan. 15, 1967. (AP Photo)
12- OBSOLETE

Other rivals to the NFL through the decades had sprung up:

There were those who thought “The Great One” went a bit too far, that he was too much of a shill for his CBS network that carried the NFL broadcasts.

With that first game history – The Super Bowl has evolved into the grandest, grossest, gaudiest annual one-day spectacle in the annals of American sports and culture. All of this incredibly spun off the game that was played that January day in 1967 at the Los Angeles Coliseum, a game that for a time lacked a name, a venue, an identity, a game that didn’t even sell out.