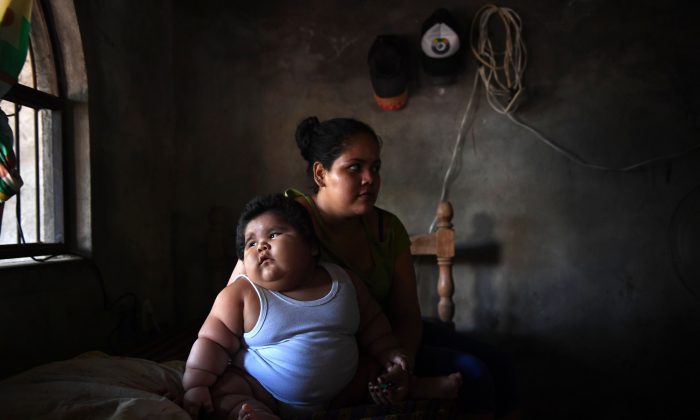 Luis Manuel Gonzales has the mind of any ten-month-old infant. He is curious about his surroundings, he wants to reach out and touch and taste everything. He wants to explore; he is trying to learn to speak.

Unfortunately, that inquisitive spirit is trapped in a body which cannot walk, or even crawl. Luis weighs 62 pounds. According to data from the Centers for Disease Control and Prevention, that is the perfect weight for a healthy nine-year-old.

Doctors are mystified why Luis is growing so fast. At birth, he weighed 7.7 pounds, just like his three-year-old brother Mario.

Luis tripled his weight in the first two months, and then kept growing.

“I thought it was because I had good breast milk,” his mother, 24-year-old Isabel Pantoja, told Agence France-Presse.

Mexico is at the top of the list for countries afflicted with childhood obesity and diabetes, an unwelcome distinction of which Luis is an extreme example.

Luis might need medical treatment to save his life—but his family is unable to afford it.

His father, Mario Gonzales, earns about $200 per month. The family lives in an unpainted cement-block house in Tecoman, in Mexico’s Colima state.

His parents learned from a pediatrician that Luis might need hormone injections that would cost $555 each.

In an effort to raise funds, Mario Gonzales and Luis’s mother, Isabel Pantoja, have created a Facebook page and set up a bank account where people can make donations for Luis.

Isabel spends every other day pushing Luis to the doctor’s office to get blood tests. So far, the doctors still haven’t figured out what is going on.

Just getting her oversized infant son to the doctor’s office is a difficult chore. Already, Isabel can barely lift Luis out of his stroller.

It is hard to even to find a stroller which can bear her son’s enormous weight. She has already had one collapse on the way to the doctor’s office.

Some doctors hypothesized that Luis might have Prader-Willi Syndrome, a genetic condition in which children have an insatiable appetite and weak muscle tone. Prader-Willi also delays brain development.

However, Luis does not crave food constantly, and he is alert and active. However, he is so fat that he cannot crawl, let alone walk. The most physical thing he can do is sit upright.

Other doctors think the giant boy has a glandular disorder.

Surgeon and nutrition specialist Silvia Orozco thinks Isabel might not have consumed certain nutrients while pregnant. This could have caused the glands that can help her son Luis manage his metabolism to atrophy.

Orozco is awaiting an analysis of tissue samples she sent to the United States to help finalize her diagnosis.

If atrophied glands were indeed the problem, hormone injections should allow Luis’ body to control its own growth and eventually Luis might live a normal life.