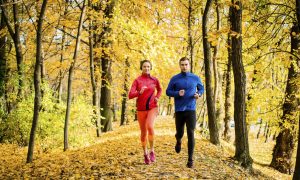 Top Exercise and Fitness Trends for 2018
0 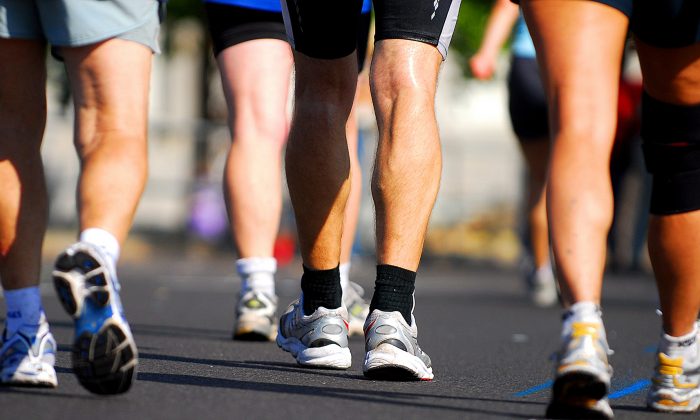 Walking, if you walk briskly enough to elevate your heart rate, is an excellent exercise. (walkingfit.ucr.edu/wikimedia)
World

People around the world are walking while looking at their watches.

They aren’t obsessed with time—they are counting paces.

The idea that people should walk 10,000 steps per day to remain slim, fit, and healthy gained currency as so many ideas do—without the benefit of any supporting facts.

Still, people look at their pedometers or fitness trackers and try to take the “right” number of steps to ensure they are preserving their health.

Moseley’s research showed that “ten thousand steps” was firmly grounded in unscientific confusion and misunderstanding, unsupported by any sort of scientific fact.

The idea that ten thousand steps was the magic number for total fitness started in the early 60s, Mosely found, when Japanese inventor Yamasa Tokei, hoping to cash in on the fitness craze surrounding the 1964 Tokyo Olympics, started marketing a pedometer.

The device bore the name “Manpo-Kei,” which indeed does mean “ten-thousand-step meter.”

The manufacturer based the device’s name on some research by Dr. Yoshiro Hatano from Kyushu University of Health and Welfare.

Dr. Hatano didn’t want to see the traditionally fit Japanese people become Americanized—he saw American habits like watching baseball instead of playing sports, eating too much, and walking too little as undesirable.

Dr. Hatano might have been a scientist, but his opinions were not scientific. He wanted to fight obesity, and he wanted a message which people could easily accept and act on.

First, the hypothesis didn’t even define “step” or “steps.” How is long a step? How many steps per minute?

Dr. Hatano estimated that the average Japanese would need to walk more than twice as far each day—but didn’t mention if strolling around an apartment would work.

Dr. Hatano never specified pace, duration, or consistency. He assumed people would double the amount of walking they did—and then assumed how many calories they would burn. That shaky math brought him to some nice round numbers: ten thousand steps for 500 calories.

Looked at objectively, it seems obvious—if people exercise twice as much, they will burn twice as many calories exercising.

“Taking steps,” though, does not equate to “exercising.” And selling “exercise” is tough. Selling “taking steps” is easy.

How successful was this campaign? Nowadays organizations such as the World Health Organization (WHO), US Center for Disease Control (CDC), US Surgeon General, American Heart Foundation, and the US Department of Health & Human Services all recommend daily activity of 10,000 steps.

All without even knowing what a “step” is.

Secondly, there was no experimentation done to test the hypothesis. No two-year trials where people were instructed to walk certain distances and paces while eating certain diets and tracking weight …. nothing like that.

The assumptions, if accepted, yielded the right numbers, if averaged. The idea of preserving health and fitness, which was part of Japan’s traditional culture, was more important than hard math.

It was an interesting idea, and it made for great advertising copy—and eventually, somehow, it bled into popular culture as an actual fact.

And it leads to the sort of thing where a woman takes several steps to cross her kitchen while loading the dishwasher because, as she understands it, the number of steps is the key to health.

Mosley and Copeland gathered a group of six volunteers, ordinary people who wanted to get a little more fit but didn’t want to join gyms or become athletes—people who would spend a little time and energy, but didn’t have a lot of either: people like most people, pretty much.

One man, Dave, explained to Michael Mosley in a BBC article, “I’m very aware that I’m not as fit as I used to be and I’ve put a lot of weight on.”

Nathan had a six-year-old daughter who wore him out, “She runs so fast, and I run so slowly, I can’t catch her up.”

Judy told the researchers, “My only activity at the moment is knitting.”

All the volunteers were fitted with activity monitors.

First, each went through a normal day, to get a baseline. Then, half did 10,0000 steps—on average, about five miles—and the other half did Active Ten, which was about a mile and a half.

The difference was intensity. The 10,000 steps group could stroll, sprint, take huge or tiny steps … while the Active Ten group was told by Professor Copeland, “You are aiming to walk fast enough so that you can still talk but not sing.”

First off, two out of the three 10,000 step testers actually managed to complete the ten thousand steps—and they struggled. Five miles of walking, with clearing time on the schedule for getting dressed, walking for 90 minutes or so, and getting back to their lives took more time than most people had free.

One man parked his car further from the office to get extra steps—just to reach a number. So of course, he had to leave for work earlier—and still, possibly gained almost nothing from the added paces.

The Active Ten people found they could do their time during coffee breaks at work. No one found it hard to set aside the fifteen minutes for each stint required.

According to the data, Professor Copeland said, the Active 10 program was not only easier—it was dramatically more effective.

“The Active 10 group actually did 30% more ‘moderate to vigorous physical activity’ than the 10,000-step group, even though they moved for less time,” he told Michael Mosley.

“And it’s when you are doing moderate intensity activity that you are starting to get the greatest health benefits.

“What we really wanted you to do was to get your heart beating faster,” Professor Copeland told the volunteers.

“There’s lots of evidence to suggest that by doing so you can lower your risk of diabetes, cardiovascular disease and some cancers.”

The British National Health Service website has information on Active 10—NHS even has a free health app people can download.

But who goes to a government site to learn about health?

The problem is that “Ten thousand steps” is easy to advertise—and easy to merchandise. You can market fitness trackers, fitness apps, pedometers which talk to the apps via Bluetooth, fancy programs to chart and analyze your “ten thousand steps”—or as many thousands as you manage to take.

Not to worry. The human race isn’t doomed to obesity. Before long someone will come out with an app which tracks heart rate and blood pressure over ten-minute walks, and has annoying alarms reminding people to do their “Active 10.”

The app will be sold along with monitors and devices for measuring, and earbuds which play ten-minute soundtracks (sold separately) which help walkers maintain the “perfect” pace for their fitness levels (Gain fitness, buy new music—never miss a beat—of your heart! The ad campaigns write themselves.)

Once marketers accept the new idea and realize it can be a money-maker… then maybe people will start getting fit.

And pretty soon, the people who can’t afford all the gear will want to join the wave. They will check the time on their phones, turn on their favorite tunes, walk for ten minutes, check their pulses by feeling their wrists, and get fit for free.

Of course, all the folks who read this article and start walking on their own, with just a phone, will be laughed at for not doing “ten thousand steps”—until the Active 10 craze catches on. Then they will be seen as visionaries—and will be admired for their fitness.