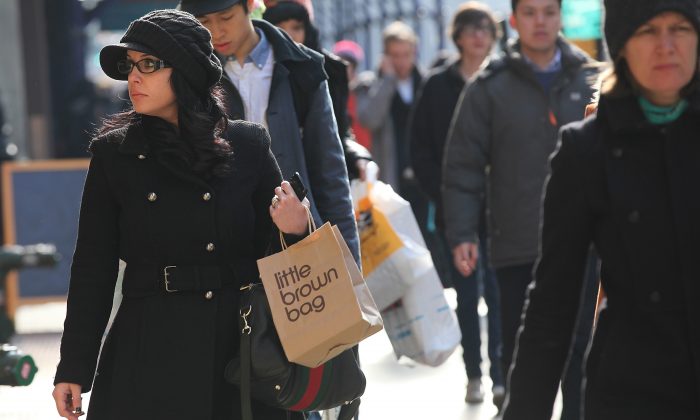 NEW YORK—As a way to encourage New Yorkers to reuse bags, City Council members are proposing a 10 cent surcharge on all paper and plastic bags at grocery and retail stores.

New Yorkers use 5.2 billion plastic and paper bags each year, with a cost of an estimated $10 million to transport them to landfills.

Unlike the failed measure proposed by Mayor Michael Bloomberg in 2008, which would have imposed a 5 cent tax on plastic bags, the new legislation is not a tax. The money will go directly to the retailer.

“It is the giving away of massive amounts of free product, whether you need it or not, that leads to those 5.2 billion bags,” lead sponsor Brad Lander said from the steps of City Hall on Aug. 20. “A simple application of a small fee for a product you are getting has been shown in cities around the country to lead to dramatic reductions.”

In 2010, Washington D.C. became the first city in the country to impose a surcharge of five cents on plastic bags. The charge resulted in a 60 percent reduction in plastic bag use, according to Lander.

By not having an outright ban, Lander hopes to avoid opposition.

“[N]ot banning them entirely means when you are coming home in the rain and you didn’t remember the reusable bag, you can get one for the 10 cent charge,” Lander said. “The nice thing about this charge is you can avoid it entirely if you bring your reusable bag.”

Lander said there will be a substantial giveaway of reusable bags, especially in low income neighborhoods, and New Yorkers on food stamps would not be required to pay the fee.

According to the draft of the bill, it will be illegal to provide credit to a person trying to avoid the bag fee.

The Department of Consumer Affairs will be in charge of enforcement of all aspects of the bill. Lander said businesses will be issued warnings first, followed by a fine for a second offense.

Whole Foods, a popular grocer in the city, stopped using plastic bags in 2008, but does provide paper bags for customers who do not bring in their own bags. For customers that bring in reusable bags a 10-cent-per-bag credit is given.

“From an environmental standpoint, we as a company have taken a stance on plastic bags because of the environmental impact of them,” Michael Sinatra, a spokesperson for the Northeast Region for Whole Foods said by phone Tuesday.

Sinatra could not give out data on the number of paper bags Whole Foods stores use in New York because it is a publicly traded company. He did, however, say many of their shoppers use reusable bags.

“We know a portion of our shopper base would not be affected by this, but it is a cost that would be passed along to the consumer,” Sinatra said. “Ultimately it is a question for consumers, if they are interested in paying.”