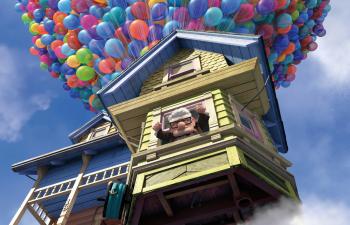 1. UP (Dirs: Pete Docter & Bob Peterson)
I’m bored, bored, bored of having to repeat with every new PIXAR release the same accolades about how they continue to redefine the boundaries of computer generated animation, let alone the brilliance of their storytelling. Predictably they went and did it again this year with the peerless Up.

The oddball odyssey of Carl Fredrikson and his emotional final pilgrimage tugged at the heartstrings with that incredible life encapsulating montage, and battered the funny bone thanks to a combination of talking dogs, giant multi-coloured birds and the most effective double-act since Buzz and Woody.

Up deserves its rightful place at the top of this illustrious list because it manages to combine all the positive aspects of the other contenders and package them into a movie that transcends genre boundaries in its appeal. Young and old will inflate those balloons and take this journey for years to come, and never once will the affecting impact of the scrapbook scene be dulled. MR

2. LET THE RIGHT ONE IN (Dir: Tomas Alfredson)
Arriving in a year when vampires couldn’t be more in vogue (three TV shows and five films by our count), Let the Right One In is a vampire tale like no other. Less a horror per se and more of a kitchen sink, social realist, life through a lens look at a depression-era Sweden and a close examination of loneliness, longing, companionship and the complexities in relationships both adolescent and adult. Already up for the US remake treatment the early signs are actually good and indicate they might be taking the source material seriously. But you’ve got to ask is it really necessary when the original is as complete as this? JC

3. STAR TREK
(Dir: J.J. Abrams)
The only summer blockbuster that actually delivered the goods, Star Trek: First Class or XI or whatever its actual postfix is, managed the not inconsiderable feat of not only largely satisfying the voracious Trekkers (not Trekkies please) but also bringing in many new fans to Roddenberry’s ever-expanding universe. Captained by J.J. Abrams, the quality should really have never been in doubt but then we’ve been burned by prequels before. Slightly skewed in a less cerebral, more action-orientated direction this is Trek (minus much techno-babble) but not quite as we knew it. It is, however, Trek as we now want it. Beam me up for more please J.J. JC

4. THE WRESTLER
(Dir: Darren Aronofsky)
Criminally robbed of the best actor Oscar, Micky Rourke was still ultimately triumphant with his heartbreaking turn as Randy “The Ram” Robinson in Darren Aronofsky’s Rocky meets 8 Mile wrestling drama. Broken, vulnerable and treading the beaten track since his 80s heyday, Rourke put himself up onscreen for all to see, exposed and raw. It was unfussy, simple storytelling that was inflected with a hugely emotional human core thanks to Rourke and his equally capable tag-team partner Marisa Tomei. Aronofsky brilliantly directs the mundane mechanics of Randy’s life and juxtaposes it with the intensity of the grappling bouts. WWE this ain’t. MR