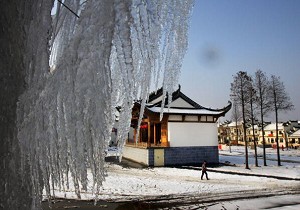 According to a report from China's National Metrological Centre, the snow storms that hit a major portion of China in recent weeks eased on Monday.

However, Southern China is expected to face more stormy weather again around Feb. 10 which may last a month.

Since mid-January, at least 100 million people from 18 provinces, cities, and autonomous regions have been affected by the bad weather. In the most severely impacted region in Central China's Hunan province, the total number of victims was nearly 40 million, including 20 deaths. China News Service said the Hunan Weather Relief Headquarters estimated that 3.52 million people were without access to adequate drinking water, 82,000 houses collapsed, 2.46 million hectares of crops were damaged and 608,000 head of livestock died.

Zhong Qimao, the assistant head of the Civil Affairs Bureau in Southeast China's Jiangxi province, said at a press conference on Monday that over half of Jianxi population — 22.1 million people — has been hit by the snow storm, resulting two deaths.

More than 38,000 hectares of crops were completely destroyed and 670,000 people were affected by a lack of drinking water. The direct economic impact has been estimated as high as 19.46 trillion yuan (approximately US$2.7 trillion).

According to survey data from the Civil Affairs Bureau in Sichuan province, the low temperatures and snowstorms have caused the break down of transportation, electricity and water supplies in 19 cities and 113 counties.

It is estimated that the total financial loss has exceeded 3.374 trillion yuan (US$450 billion) including 1.928 trillion in agricultural losses.