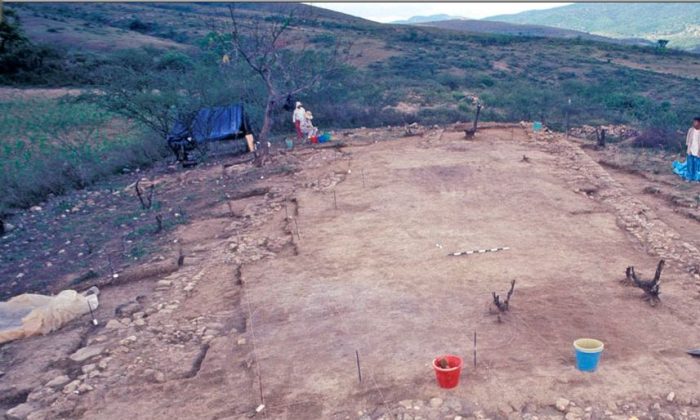 A view of part of the excavated temple complex, where human sacrifice may have taken place. (Screenshot/LiveScience)
Science

Temple Human Sacrifice: Ancient Priests Could Have Done It

The temple precinct dates back to 300 to 100 B.C., and was similar to those used in later Mesoamerican states, according to researchers.

Priests in the temple, situated in Mexico’s Valley of Oaxaca, were specialists, full-time, and arranged in a hierarchy, the researchers propose, based on their findings.

Charles Spencer and Else Redmond, both of the Division of Anthropology at the American Museum of Natural History, submitted their findings to the journal Proceedings of the National Academy of Sciences.
The researchers are not sure human sacrifice presided over by the priests took place, but did uncover a human tooth and part of what could be a human limb bone from a temple room full of animal sacrifice remains and obsidian blades.

The tooth and possible limb bone were found in the main room of the temple, and the obsidian blades and lances suggest the priests “engaged in ritual bloodletting and animal sacrifice, as did the remains of turkeys, doves and other animals in the temple hearth,” according to Live Science.

They also found a hastily buried body in one of the temple’s fireboxes.

The temple was likely used by the Zapotec Civilization, which resided in southern Mexico through about 700 A.D.