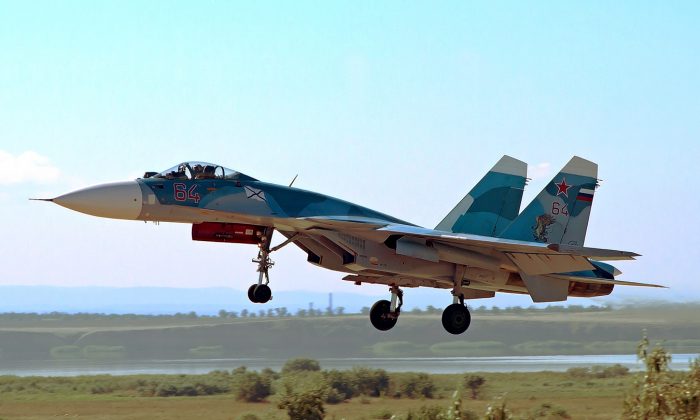 While “handmade” is usually a good thing, this isn’t the case for the equipment used in modern combat aircraft. A propaganda video aired by the official Chinese broadcast mouthpiece shows key components of the J-15 fighter jet, which are made for aircraft carriers, being manually polished at Shenyang Aircraft Corp.

The CCP has made massive investments in modernizing its military in recent years, but its armaments and military sector has been dogged by tales of corruption, ineptitude, and the need to burnish the force’s might through propaganda for a domestic audience.

The J-15 and its predecessors are a derivative of a Soviet-designed Sukhoi combat aircraft, designated “Flanker” by NATO militaries.

By CCTV’s account, the fighter jet components produced by the technicians are controlled at three micron. That’s 0.0001 of an inch, or about 1/25 of a human hair. CCTV reported that the parts, which supposedly require a human touch because they are too difficult to be built by machines, needed to be replaced over 200 times each year.

“Nowadays advanced [computer numerical control] can completely achieve precision of two micron. The technician in the report would have to be a superman to be as precise as 3 micron,” said one user.

“How can a tool like that produce fighter jets?” another netizen said. “The precision of the numerical control machine is so backward. Shame on CCTV for trying to sensationalize such a humiliation.”

Another described the CCTV claim that “Chinese fighters focus on feelings while Americans want practicality” as “too hard to believe.”

Based on the Su-27 “Flanker,” the Su-33 fighter jet dates back to the late 1980s, when the Soviet Union was still shelling out vast sums to produce weapons capable of going toe-to-toe with Western adversaries. While no longer a new design, the Flanker remains a versatile and advanced plane, particularly with upgrades.

In the early 1990s, the Chinese acquired the Su-27, which it built under license from the Shenyang Aircraft Corp. as the J-11. Forming the backbone of their fighter jet production, this state-run manufacturer has been at the center of major corruption scandals, including allegations that almost all of their production projects involve outsourcing.

The J-11 designs were later reverse-engineered and the CCP began producing homegrown derivatives of the aircraft. In 2003, a Ukrainian prototype of the Su-33 was sold to China, and it is believed to have formed the base of the J-15, a handful of which are undergoing trials for use on its aircraft carrier, the Liaoning. The carrier itself is a retrofit of the Varyag, a Soviet “heavy aviation cruiser” also owned by Ukraine before its sale to China.

But despite these purchases and upgrades, the Chinese industry itself seems to be complicating the communist regime’s military dreams. Chinese combat jets are still reliant on either aging Russian engines from the 1980s, or locally produced powerplants that suffer from poor quality and compatibility problems.

Part of the reason for this dearth of quality that is holding back China’s fighters lies in the corruption and shortcuts common in the nation’s state-run industrial complex.

Last year, Epoch Times interviewed a manager at the Shenyang Aircraft Corp. who exposed a scene of widespread corruption and faulty production methods.

Using a pseudonym, the manager said, “Four company executives formed partnerships and embezzled about 100 million yuan ($16 million) each year. The corruption is to the degree that money had already been stolen before the aircraft parts entered production.”

The corrupt executives replaced some of the key components in the fighter jets, and heads of private companies paid people off to settle the issue.

According to the manager, because of hidden dangers lurking in its military aircraft, the Shenyang corporation has to have specialized repair teams on standby at all times when the Chinese air force conducts operations.