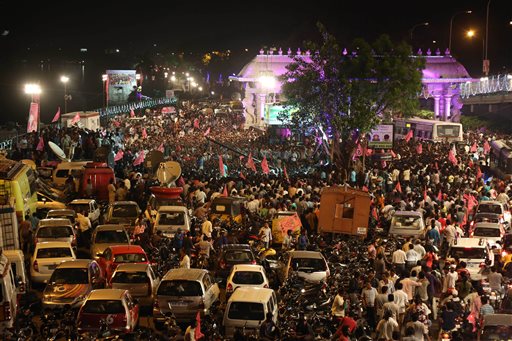 In this Sunday, June 1, 2014, photo, close to midnight, people celebrate on the street the formation of India's 29th state, Telangana, in Hyderabad, India. Celebrations greeted the creation Monday of India's newest state of Telangana, marking the formal division of the southern state of Andhra Pradesh. (AP Photo/Mahesh Kumar A.)
India

Telangana: Latest News is That Official Map Will Take Weeks to Produce

Many people celebrated the creation of India’s newest state, Telangana, this week, as regional political leader K. Chandrasekhar Rao was sworn in as the state’s chief minister

Rao led a 14-year struggle for the creation of the state, with the information technology and industrial hub of Hyderabad as its capital.

Maps have been circulating showing Telangana but an official map won’t be available for some time, officials said.

An official with the Survey of India told PTI that the Ministry of Home Affairs has to provide boundary details to the survey, then an official map will be made.

“It may take some more time. We are yet to get details from the MHA. Based on that, our teams will incorporate boundaries up to village level.”

A map that shows the region of Telangana, India. It was recently made into a new state. (PlaneMad/Wikimedia)

Swarna Subbarao, the surveyor general of the country, told the Economic Times that it will take 10 days to create the map after getting the boundary details, meaning it will likely take weeks for the map to be made.

Poonam Malakondaiah, principal secretary of school education, added that the schools are also waiting for an official map to incorporate into text books.

Telangana supporters say their drought-prone area in northern Andhra Pradesh remained underdeveloped and its residents faced discrimination in the allocation of funds, water and jobs.

Telangana, which comprises 10 districts of Andhra Pradesh, has a population of 35 million.