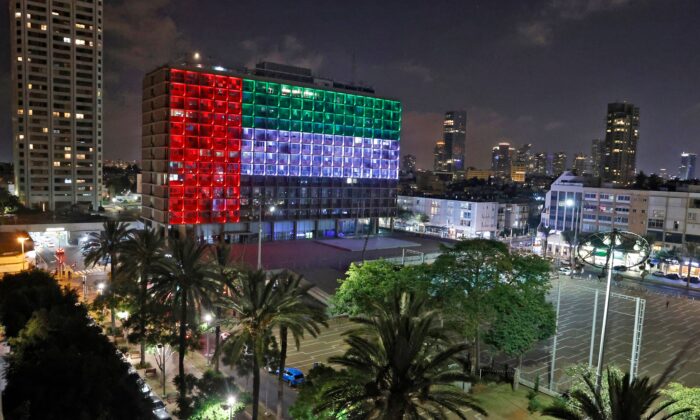 The city hall in the Israeli coastal city of Tel Aviv is lit up in the colours of the United Arab Emirates national flag on Aug. 13, 2020. (Jack Guez/AFP via Getty Images)
Economy

Tel Aviv Becomes World’s Most Expensive Place to Live In

Tel Aviv, the economic and technological center of Israel, has pushed all cities down to perch atop the most expensive cities’ list currently in 2021, according to a global index (pdf) which tracks the cost of living in 173 cities across the world twice per year.

The Economist Intelligence Unit’s (EIU) 2021 Worldwide Cost of Living (WCOL) index announced today that Tel Aviv had jumped from the fifth position to claim the title, overtaking Paris and Singapore, jointly in second place. This is the first time Tel Aviv has occupied the top position, and it’s mainly due to soaring price increases led by grocery and transport. Residential property prices in the Israeli city have also gone up.

Rome, Italy dropped the most on the list, from the 32nd position to 48th. Prices saw sharp declines in the shopping basket and clothing categories.

U.S. sanctions have contributed to Tehran in Iran jumping the most on the list. Hyperinflation has resulted in sharp price increases and product shortages. The city jumped 50 places from 79th to 29th.

To collect data while compiling the list, researchers are given a list of 200 products and services, with more than 50,000 individual prices that are collected every six months. WCOL index is released every June and December.

The products include “food, drink, clothing, household supplies, and personal care items, home rents, transport, utility bills, private schools, domestic help, and recreational costs.” Prices are collected from supermarkets and specialty outlets in the cities. Data from all cities are pitted against New York with an index value of 100.

Shortages and supply chain disruptions have contributed to an increase in prices across numerous products globally. Based on data collected for this survey from Aug. 16 to Sept. 12, prices for goods and services have gone up 3.5 percent year-on-year, compared to 2020 when it was 1.9 percent. This does not include cities with hyperinflation like Tehran (Iran), Damascus (Syria), Buenos Aires (Argentina), and Caracas (Venezuela).

Transportation saw the biggest jump on the index with 3.8 points while the average price of petrol soared by 21 percent.

While European and developed Asian cities dominated the top of the rankings, Africa, the Middle East, and poorer parts of Asia were the cheapest to live in. Meanwhile, U.S. cities were more moderately priced owing mainly to the strength of the dollar.

Damascus in Syria and Tripoli in Libya were the cheapest cities in the world. 40 new cities were added to this year’s list, and the most expensive in this category was the Scottish capital, Edinburgh, which came in the 27th position overall.