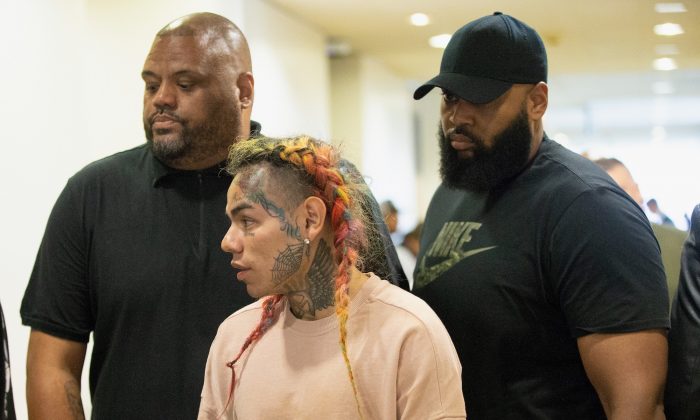 Daniel Hernandez arrives for his arraignment on assault charges in County Criminal Court No. 1 at the Harris County Courthouse on Aug. 22, 2018, in Houston, Texas. (Bob Levey/Getty Images)
Crime and Incidents

Brooklyn rapper Tekashi 6ix9ine has pleaded guilty to nine charges and said he was part of a violent gang, according to court records.

Hernandez pleaded guilty on Jan. 23, and the information was unsealed on Friday in a Manhattan federal court.

The 22-year-old is allegedly part of the Nine Trey Gangsta Bloods, that operates in and around Manhattan, the Bronx, and Brooklyn.

“Members and associates of Nine Trey enriched themselves by committing robberies and selling drugs, such as heroin, fentanyl, furanyl fentanyl, MDMA, dibutylone, and marijuana,” according to the U.S. Attorney’s Office.

Hernandez with his lawyer Lance Lazzaro pleaded not guilty in November 2018, insisting he was innocent.

“An entertainer who portrays a ‘gangster image’ to promote his music does not make him a member of an enterprise,” Lazzaro had said at the time, according to RollingStone.

Page Six reported that Hernandez joined the Nine Trey gang in 2017 and admitted his involvement in shooting rival gang members in court.

“On or about June 2, 2018, in furtherance of Nine Trey, of the Nine Trey enterprise, I paid a person to shoot at a rival member of Nine Trey to scare him. The shooting took place in Manhattan,” he said, according to Page Six.

This was the same day there were reports that rapper Chief Keef was shot at outside the Times Square W Hotel in New York City.

“I did this to maintain or increase my own standing in Nine Trey,” he told Judge Paul A. Engelmayer. He said he also “knew that another member of Nine Trey had a gun and discharged that gun.”

The rapper also said he helped other gang members rob people at gunpoint as part of a pledge by new gang members to commit at least two crimes.

“I apologize to the court, to anyone who was hurt, to my family, friends, and fans for what I have done and who I have let down,” Hernandez said.

Hernandez has 15.5 million followers on Instagram. He’s known for his multiplatinum hit song, “Fefe,” with Nicki Minaj and his album, Day69: Graduation Day.

His attorney, Dawn Florio, said Hernandez’s safety is a priority.

“In the very beginning of the case when we found out that my client’s security was at risk because of threats by his co-defendants, we have done everything to protect himself and his family,” she said. “He has to be separated from the people who threatened him.”

He now faces 47 years behind bars, but it’s likely he will have a significantly reduced sentence for cooperating with authorities, according to TMZ.