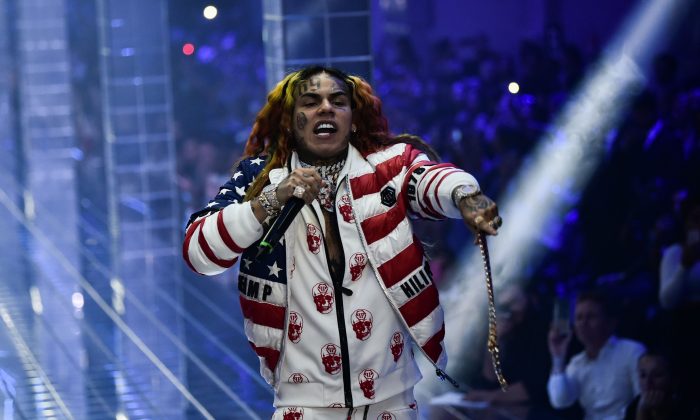 Rapper Tekashi 6ix9ine, whose real name is Daniel Hernandez, has been accused of involvement in multiple acts of violence as part of a deadly gang, and if convicted faces a minimum mandatory sentence of 32 years in prison.

Judge Henry B. Pitman denied bail to Hernandez at a hearing on Monday, Nov. 19, after a prosecutor cited evidence purporting to show the rapper’s involvement in a number of violent incidents.

The rapper’s arraignment took place at the U.S. District Court for the Southern District of New York, according to NBC.

Attorney Michael Longyear said a backpack stolen during a gunpoint robbery in April was found during a raid at the rapper’s Brooklyn residence, along with an automatic pistol.

“The defendant is quite violent,” the prosecutor said of a man whose debut album, “Day 69,” was among the most downloaded records on iTunes.

Longyear said Hernandez was captured on surveillance video as he sat in a car and filmed the scene in Times Square when his co-defendants carried out a violent robbery against a rival gang member.

The prosecutor said he was also part of a video boasting about shots recently fired by a co-defendant in Brooklyn’s Barclays Center.

Longyear also said the rapper was a threat to flee because of his worldwide connections, hundreds of thousands of dollars in cash, and the knowledge that a conviction would bring a mandatory minimum sentence of 32 years in prison and as much as life.

Hernandez was arrested on Sunday night and faces a range of federal charges for which he faces a maximum sentence of life in prison.

The accused is facing six counts, according to a 17-page indictment, with the most serious of those being the discharging of a firearm while committing a crime. Federal charges against him include racketeering allegations stemming from Hernandez’s involvement with an alleged criminal organization, as well as a previously unreported armed robbery.

The rapper has publicly identified himself as a member of a violent New York gang, 9 Trey Bloods, which was mentioned throughout the indictment.

“[Hernandez] is a member of a violent sect of the Bloods,” said Longyear at the arraignment. “This defendant participated in multiple acts of violence.”

Prosecutors said the gang carried out acts of murder, robbery, and narcotics trafficking in Manhattan, the Bronx, and Brooklyn since at least 2013.

According to the Daily Beast, two days before Hernandez was indicted, federal agents visited him to warn that his life was in danger.

Investigators have revealed that several of the rapper’s associates were overheard on a wiretap saying they wanted to “super-violate” him.

Hernandez had recently fired the associates and disparaged them on a radio show, according to the report.

Agents reportedly brought the rapper to Homeland Security’s New York headquarters, and after disclosing details of the threats made against him, and offered to put him up in a hotel. Hernandez declined and returned home, where authorities kept him under 24-hour surveillance.

At Monday’s hearing, the judge ordered Hernandez be held until a Nov. 20 bail hearing, saying he was concerned about the danger to the community, particularly because the rapper could direct others to carry out acts of violence.