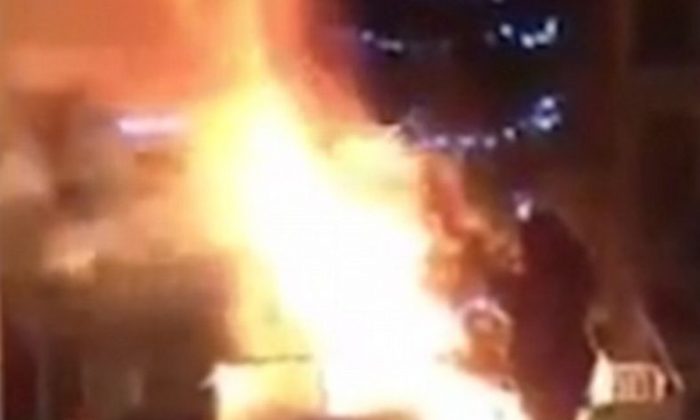 A video shot on New Year’s Eve has surfaced showing a group of youths throwing a Molotov cocktail at a Christmas tree Brussels, Belgium–even as the city was on lockdown due to an increased terror threat level.

It shows the youths vandalizing the tree in the city’s Anderlecht area, RT.com reported. The group surrounds the tree before setting it on fire with what appears to be a Molotov cocktail. A loud explosion is heard before the tree catches on fire.

As the tree burns, some are heard shouting, “Allahu Akbar,” which means “God is great” in Arabic, according to RT and other media outlets.

The video was originally uploaded on LiveLeak and Facebook before making its way to YouTube. The original uploader, named as Mohamed Amine, has since taken down his Facebook page, according to News Ltd.

The tree was located near the Clemenceau metro station, local news site HLN reported. The same group of youths may have been the ones that pushed a car down the stairs of the subway station on the same night. One person was arrested in the car crash incident, which went viral on Facebook.

Brussels MP Jamal Ikazban criticized the youths in the video.

“I have a thought for the person who wakes up quietly this January 1 and finds out that his car is in the subway,” he said, according to MailOnline.

He also criticized the security apparatus in the city amid the increased threat level.

“It is not only not funny, but what is the most frightening it is to imagine that it is possible to take a car in the underground despite the warnings of level 3 AND 4, the presence of the military, the many cameras,” he said.

“Let us imagine for a moment that same car full of explosives in the subway and you will understand that we are entitled to ask ourselves the question of the effectiveness of all these new security measures.”

“Brussels is no longer a free city,” wrote one person on Amine’s Facebook page. “Anyone who has ever had the opportunity to travel abroad may realize that the situation in Brussels is neither normal nor tenable in the long-term.”

“Brussels will die economically, socially and touristically, especially if no drastic policy is conducted within 10 years. I am very serious.”

“Today they will set fire to a Christmas tree, tomorrow they will behead a Christian,” wrote another  man.

“When they celebrate Ramadan nobody bothers then, so why do they attack the beliefs of others?” another added. “We will not stop celebrating the birth of Jesus.”