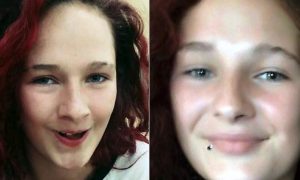 Teens Missing in Algonquin Park Found Thanks to Zoe the Labrador

The main player in a successful rescue search at Ontario’s Algonquin Park was none other than Zoe the Labrador, a two-year-old police dog working diligently with the Ontario Provincial Police’s canine unit.

On Monday, July 15, two missing girls were able to safely reunite with their families thanks to this talented pup. Maya Mirota and Marta Malek, both 16-year-old scouts hiking at Algonquin, reportedly camped in the woods for more than three days before they were found. The girls had gotten lost in the huge park after accidentally straying from their hiking trail, and were reported missing after they failed to meet up with their group.

Zoe was brought in on Monday as part of four search-and-rescue dog teams to help look for the pair. Within 90 minutes, the Labrador retriever had already started to show signs that she’d picked up a scent.

“She became excited,” OPP officer Scott Gannon told CBC News. “And we watched her, and then she proceeded to go down the trail.”

Gannon added that Zoe tends to stay close to him when she hasn’t picked anything up, but once she does smell something, she “beelines it towards that source.”

The officers in Zoe’s unit began calling the girls’ names as they were following the lab down the trail. Before long, they heard the girls calling back.

Maya Mirota and Marta Malek were found safe and “in good physical condition,” although a little dehydrated and with several insect bites. Both of the girls were scouts with the Polish Scouting Association in Canada and possessed the skills of experienced campers, according to Stan Reitmeier, the association’s chair.

The girls had equipment and food with them and were “up to the challenge when they became detached from their group,” Reitmeier said in an emailed statement.

Mirota and Malek were so happy to see the rescue team that they gave the officers hugs and asked to pet Zoe.

The police dog has also been enjoying her moment of fame following the news. After OPP made the happy announcement on Twitter, Zoe has been garnering praise from many relieved social media users.

“Such such great news!!!! All those searching should be commended for their determination and hard work especially those oh so awesome dogs,” one wrote under the tweet, adding a series of heart emojis as well as the hashtag “#happyending”.

Our rescue hero Zoe is a yellow Labrador retriever, one of the most popular breeds with families due to their friendliness but also an excellent choice for a professional police dog.

The labs’ strength lies in their genetic makeup. Because the earliest Labradors were bred to find and retrieve hunting game, they have both an extraordinary nose as well as a strong and agile body. The dog’s high energy level also gives them the advantage of being a fast and nimble worker, more than capable of continuing their task for long periods of time.

Zoe, of course, has perfectly proven the labs’ forte in search and rescue; they’re often used by police for their extraordinary sense of smell, whether in finding missing people or sniffing out drugs and weapons.

Labradors also have the rare natural talent of being able to remain calm in almost any situation. This makes them good with children but also very useful police dogs, since working in a professional team like the OPP canine unit may often expose them to stressful or dangerous environments. Their cooperative nature and obedient personality have let Labradors remain highly-ranked among the best police dog breeds.

The Ontario Provincial Police specifically names Labrador retrievers as one of their main breeds on their website, where they promise that the canine unit is “on call 24 hours a day, 7 days a week” anywhere in Ontario.