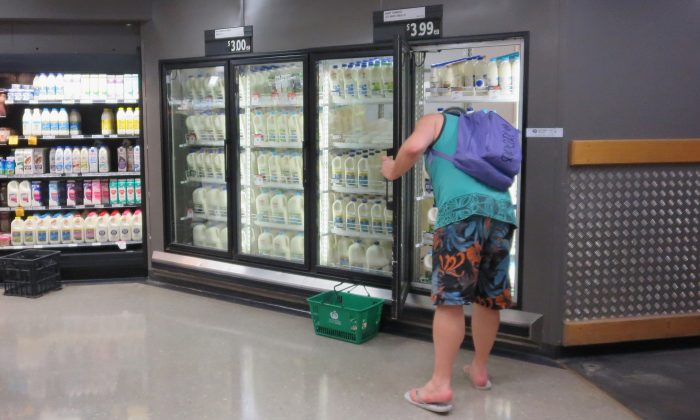 A shopper buys at a Woolworths supermarket in Sydney, Australia on, May 24, 2016. (Getty Images)
US News

Brittney Edwards posted the video to her Facebook page after seeing the video, WTHR reported on July 23. Edwards said her daughter attends school with a girl in the clip.

The video shows the teens taking bottles from the cooler inside the store, which was not named. They then open the bottles, spit in them, place the caps back on, and then place the bottles in the cooler.

A central Indiana mother is “disgusted” by the video she saw on Instagram, showing two teen girls spitting into soda bottles and putting them back in a local store’s cooler. https://t.co/Qrb91RVyoM

“I’m like ‘Are they spitting in there?'” said Edwards. “When I first saw it, it just made me disgusted because I’m pregnant,” she added.

Edwards said that she doesn’t understand why they would do something so vile.

“I don’t know what’s in kids’ minds these days, but that’s not right at all,” she told WTHR, which is based in Indianapolis.

The identity of the teens was not disclosed.

A number of social media users expressed disgust by the stunt.

A second said that “we can’t even grocery shop now.”

“Parents, put your phones away and pay attention to your kids. Make them get jobs and raise better people. Mine aren’t perfect but they wouldn’t do this because there would be consequences,” one man added.

Edwards said that it’s not only disgusting, but also potentially dangerous.

“At the end of the day, somebody could [get] sick, horribly sick. Hospitalized,” she told WTHR. “It don’t matter. That’s worse than E-coli to me.”

Indianapolis Metropolitan Police said that the teens carried out consumer product tampering, which is a felony in Indiana, 10TV reported.