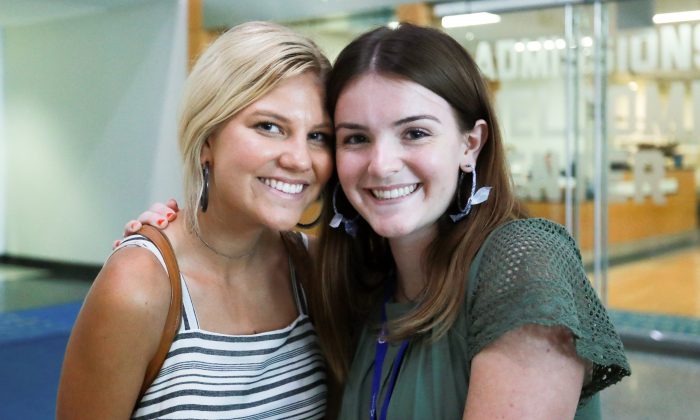 Teenagers Inspired to ‘Fight for Freedom’ in America

WASHINGTON—High school students are banding together to support conservative principles in America, such as small government, individual liberty, and free-market capitalism.

“It really is such an accepting movement, because it’s really fighting for freedom of every individual, and I think that’s just such a great thing,” she said.

For her, the overall theme was about being thankful to live in America, “because it’s such a free place and that’s something we should never take for granted.”

She said the speakers inspired her to get more active in the political community as she heads to college in the fall.

“Coming here has really strengthened my resolve to be more firm in what I believe in,” she said. “My goal now [is] to be more of a participant than just a viewer.”

One girl asked Kirk what to do about a friend of hers who told her that if she returns to Arizona with her MAGA hat, she’ll make sure she is lynched, “like the slaves were.” The girl said she is half black and half Mexican, while her friend is black.

He urged the teenagers to exercise restraint, but to stay strong in their beliefs “and don’t waver an inch.”

“Respond with grace, be the bigger person, and have a better argument,” he said.

Kirk intends to grow TPUSA further in the next 18 months, while personally supporting Trump’s reelection.

“And I want to become an ever bigger, more forceful critic of two horrific ideas: atheism and Marxism,” he said.

“If you look at the reality of the situation, we’re the more tolerant party,” he said. “We had the ability to boo Mark Cuban off the stage because of his non-support for Donald Trump. But we welcomed him and we had an open debate, and frankly for me, I learned that his health care policy that he wants to introduce actually works. And it’s important to me because my father’s a doctor, and he’s griped on for years now about Obamacare and what that’s done.”

He said he was shocked by Jaco Booyens’s speech about the child sex trafficking industry.

“These sex trafficking rings … they pound the girls into these sex slaves, and it’s happening in Hollywood and it’s being uncovered more and more every day, and hopefully this administration can find a solution to that issue,” he said.

“The Republican Party is a lot more against child sex trafficking because not only are we the pro-life group, but we are also pro-’everybody has the chance to be the best person they can be.’”

Cahalan’s friend Eric Fisher, also 16, said the conservative movement is spreading globally, especially in France and Italy. He said it’s ushering in a new era of “conservative Reagan values that will move all of those countries forward and their respective rights.”

Fisher, from Regis Catholic High School in Eau Claire, Wisconsin, said he plans to major in business and possibly minor in journalism once he gets to college.

Almost every hand shot up when Candace Owens asked the teenagers if they had been called Nazis. The hands came up again when she asked: “How many of you have been called racist?” and “How many called sexist?”

Owens, a rising star in the conservative movement, shared some of the names she has been called since vocalizing her support for President Donald Trump. We will not repeat them here.

“Let me tell you a thing about being called names: It doesn’t really matter,” she said. “This is sort of the game you have to play to be yourself, to say what you actually think. Especially when you’re in an environment where everyone is trying to tell you what to think.”

Owens said she used to be a liberal because that’s the way she was conditioned to think.

“I think that that’s really a big problem in the black community in general—is that we’re so burdened by poverty, we’re so burdened by grief, that sometimes we don’t have enough time to come up for air and consider the issues that are facing us in the political spectrum,” she said.

But once Trump threw his hat in the ring for the presidency, Owens said, she started thinking critically and bucking the media narrative.

“They’re trying to use fear to strap me into this existence,” she said. “There’s this awakening happening where we’re starting to understand that what we’re seeing on TV is not real life.”

Owens used examples from pop culture to encourage teens in a world that says “no” a lot.

She said she hopes the high schoolers all walk away from the summit with “the confidence to be yourself, and of course, you love yourselves like Kanye loves Kanye.”

Her words resonated with Lexi Hamel, an 18-year-old who is heading to Southern Utah University on a golf scholarship in the fall.

“She just had a really good overall message, saying that, you believe in you, love yourself, and you can aspire to be anything that you want to be,” Hamel said.

“I took that to heart because I would love to be where these guys are in the next couple of years.”

Hamel will be juggling school and golf and extra-curricular activities, “but politics is my passion, so if that goes over golf, then that’s what it’s going to have to be.”

Her long-term goal is to be on Fox News.

Brittany Misiora, 17, from Montville High School in New Jersey, said she has been called a racist and a Nazi for supporting Trump. She said her teachers cried when Trump was inaugurated, and they make comments when she wears her Donald Trump shirt.

“New Jersey’s so Democrat and all my friends are Democrats, so to me, other people like me that share my beliefs, [the summit] was so incredible,” she said. “I loved it. I learned so much and so many skills on activism and gathering information, so I’ll be able to defend my beliefs a lot better.”

Dr. Sebastian Gorka, former deputy assistant to Trump, told the young audience that they are the frontline.

“Ronald Reagan was right: The loss of liberty is always just one generation away. You have to always be ready to fight for your freedom,” he said.