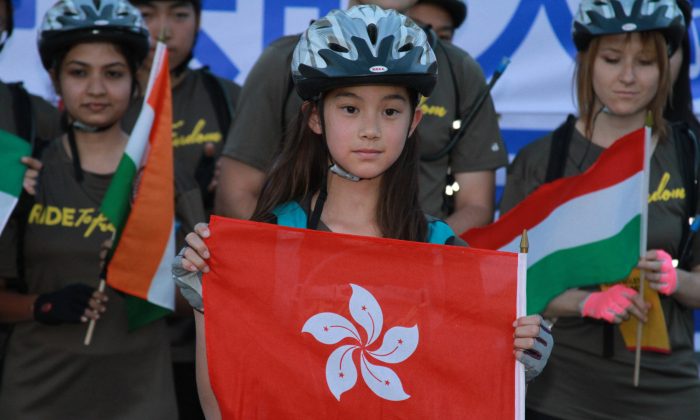 Aila Verheijke represents Hong Kong in the Ride2Freedom project, a bike tour from Los Angeles to Washington, D.C., during June and July to raise awareness about the human rights situation. (Ride2Freedom)
Northern California

SAN FRANCISCO—Aila Verheijke and Jimmy Ma have returned to San Francisco from the 3,000-mile bike ride called Ride2Freedom, which traveled across the United States to help stop the persecution of Falun Gong, rescue five orphans, and spread awareness of the human rights situation in China. Aila was born in China during the persecution of Falun Gong.

To people she came across, Aila would say: “Hi, have you heard about Ride2Freedom? Ride2Freedom is a team of 26 teenagers that will bike from Los Angeles to Washington, D.C., to raise awareness about the persecution happening in China. Have you heard about Falun Gong? No? Falun Gong is a spiritual meditation practice of truthfulness, compassion, and forbearance.”

The 26 bikers participating in Ride2Freedom came from a number of countries, including Argentina, France, Austria, Germany, India, Iran, Hungary, Israel, Czech Republic, the United States, and China. Aila, who is now 11, represented Hong Kong because that is the place she lived the longest—seven years.

Of the world’s 19.5 million refugees, 51 percent are under 18 years old, according to the UNHCR’s figures released at the end of 2014. In July 1999, 70 to 100 million Falun Gong practitioners met with an unprecedented persecution in communist China. Millions of children have also suffered as a result of the persecution, according to the Ride2Freedom website.

Many children of Falun Gong practitioners experienced one or both of their parents being detained in jails or labor camps and tortured, or even murdered.

Many children were expelled from school. Many became homeless or refugees. Aila’s family members escaped from China when she was 3.

The Ride2Freedom team members wrote an open letter to Xi Jinping, the head of China’s current regime: “President Xi, you are a father. As a parent, does it not pain your heart to think of these suffering children?” In their letter, they ask for freedom of belief and an end to the persecution of Falun Gong.

When asked about her understanding of the persecution of Falun Gong, Aila said, “It is very bad—very, very, very bad—like very, very bad. It somehow relates to me because before, in Beijing, my grandma, she was sent to jail a few times, and there was one time that she got tortured till she was blind and deaf. When I grew older she told me this. But then we moved out of China and my grandma was able to hear and see again.”

Aila would also speak to strangers she came across about Falun Gong practitioners in China being killed so that their vital organs, such as liver, kidneys, and heart, can be taken for transplants.

The World Organization to Investigate the Persecution of Falun Gong recently posted evidence on its website demonstrating that more than 2 million people have been killed for their organs by the Chinese Communist Party.

“We need to stand up for them”

Jimmy Ma, 15, another Ride2Freedom biker, came from China to the United States when he was 9. He now lives in California. When asked what he told people during the Ride2Freedom trek, he said: “I tell people, ‘Doing nothing does nothing.’ For these innocent people it is worthless. They are being persecuted every day. We need to stand up for them.”

He speaks with a serious tone in his young voice. “Their life is more important than our comfort. I can stay in the house and play video games, or I can connect to these people’s lives being jailed. So I have to stand up for them.”

He himself was once one of the innocent people being jailed. “When I was five months old, me and my mother were both jailed in China for one month.”

Riding to Save Orphans

The team met with a lot of support. Aila said, “Even some Chinese tourists would say: ‘This is amazing. I don’t know whether I know much about Falun Gong. What you guys are doing is very cool. So keep up the hard work.'”

On the highways, the big trucks expressed their support in their own way. Aila imitated their honking: “They go ‘boo, boo, boooooooooo.'” The team was organized into beginners, intermediates, and advanced bikers, who would take turns during the tour. Aila, being the youngest of the riders, was one of the beginners.

“I didn’t believe that we were there. I thought it was a dream. But then I figured it wasn’t, because my muscles were sore, so that proved we had biked all the way,” she said.

In Washington, D.C., the Ride2Freedom team participated in the annual Rally to Call for an End to the Persecution of Falun Gong on the west terrace lawn of the U.S. Capitol.

Besides raising awareness of the human rights situation in China, some of the Ride2Freedom bikers planned to fly to China to save children who had lost their parents due to the persecution of Falun Gong. They wanted to save five orphans. But it “never happened because no one could get their visa to go to China,” Aila said.

Next year, another Ride2Freedom may need to take place. It may become Ride2Freedom Europe, Aila said. She is already thinking of participating again, hoping that next time, “we might go to China.”