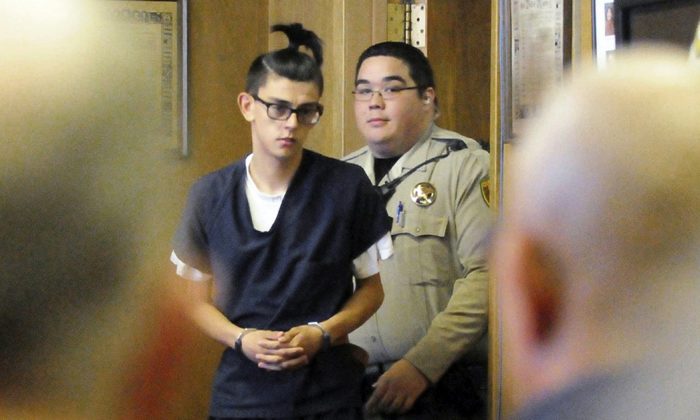 CLOVIS, N.M.—A New Mexico teenager convicted of opening fire and killing two people at a public library will spend decades in prison before being eligible for parole under a sentence imposed Feb. 15 by a state district judge.

Judge James Hudson made his decision after hearing emotional testimony during a 3-day proceeding. He sentenced Nathaniel Jouett as an adult to two life sentences that will run concurrently plus 40 years in prison for carrying out the 2017 shooting at the Clovis library.

The Eastern New Mexico News reports that the earliest Jouett could be eligible for parole would be 2051.

Jouett, who turned 18 last month, addressed the court Wednesday in his first public statement since the shooting. He apologized to the numerous victims who made statements at the start of the week.

The sentencing hearing followed a decision by the judge in December in which he denied a motion to conduct a hearing to determine if Jouett is amenable to treatment. That could have made him eligible for release when he turned 21.

Tears flowing in the courtroom as the state describes how the shooting impacted the survivors’ lives. @NewsChannel10 https://t.co/HMJQCGOSeB

The judge said Friday he believes Jouett has the potential to be rehabilitated but he acknowledged that there are some questions about the potential for success. He also said in deciding the punishment that it would hold Jouett accountable for his actions as well as promote and protect public safety.

The judge took a few moments to recount what happened at the library on Aug. 28, 2017. He described the events that unfolded as horrific, as Jouett stood with a gun in his hand and shouted at victims before he stalked and shot at more victims before surrendering.

“The quiet of the Clovis-Carver Library was shattered as gunshots rang out. Bullets pierced the quiet, leaving in their wake tragedy, heartbreak, and death,” the judge said.

The result was what the judge described as “a tsunami of harm” for the victims and their families.

Hudson said there appeared to be two sides to Jouett—one a caring and compassionate young man; the other an isolated teen who was struggling with anxiety, depression, and substance abuse. Still, he said he would not ask why Jouett did what he did.

“I do not ask why because there is no why that would ever suffice. No one will leave today with that question answered,” the judge said.

A teenager will spend decades in prison after a judge says he stood with a gun and shouted at victims in a public library in New Mexico where he killed two workers and seriously wounded four other people. https://t.co/LUVKmZlncP

Prosecutors had asked that Jouett be sentenced to 96 years in prison, which would have effectively meant a life sentence without parole. The judge said such a sentence would exceed his authority.

Defense attorney Stephen Taylor asked that his client serve only 20 years in prison followed by five years of supervised probation. The judge said that would not provide enough accountability for the crimes.

The Associated Press generally does not identify juveniles charged with crimes as a matter of policy. It has identified Jouett, however, because of the seriousness of the crime.