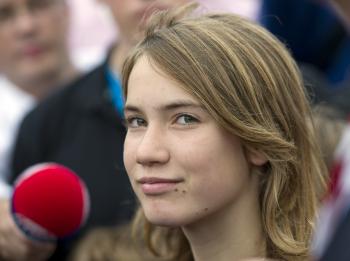 Resa Xu
View profile
Follow
biggersmaller
Print
Laura Dekker, 14, arrived in Lisbon on a stop during her solo sailing trip around the world. Next, she is sailing to the Canary Islands, off the coast of North Africa.

"Everything is going well. She's very happy," her manager Peter Klarenbeek told the the Associated Press. “The weather is very good. There's a bit of a strong wind but … it's no problem."

Klarenbeek has been monitoring her movements via satellite telephone.

Dekker plans to stay in the Canary Islands for at least two months to wait out the Atlantic storm season, which has already produced four named storms.

There, she will do her homework, visit family, and put cameras on her yacht, Guppy.

After that, she will head to the Cape Verde Islands further away from West Africa and then travel the Caribbean, AP reported.

Laura Dekker was originally going to start her trip in the port town of Portimao, Portugal, to try to break the record for youngest solo sailor to go around the world. Instead she began from the British territory of Gibraltar, as the port has less stringent regulations.

She wrote on her weblog at lauradekker.nl yesterday that she did not like the attention in Portimao.

“I was in Portimao after just one day approached by the press and tourists. All day there were dozens of people on the pier," she said, which was translated from Dutch. "And everyone had to take pictures! I found it really annoying.”