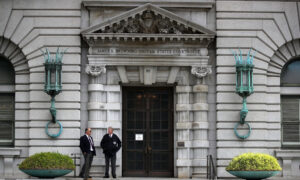 A teenager was killed and two others were injured in a shooting incident outside a Brooklyn park on Sunday evening, police said.

The three teen victims, all male, were shot before 6:40 p.m. Sunday outside George Walker Jr. Park, on Vermont St. at Jamaica Ave. in Cypress Hills, according to police.

A boy, 16, was shot in the head and was pronounced dead on the scene, while an 18-year-old was rushed to Kings County Hospital with life-threatening gunshot wounds to the head. The third victim of the shooting, aged 17, is in stable condition at Brookdale Hospital after he was shot in the leg, police said.

The New York Police Department (NYPD) told The Epoch Times that no arrests have been made so far in connection with the incident.

In a separate incident earlier in the day, a 40-year-old was fatally shot in Woodhaven, Queens. Shaka Ifill was shot outside a home a home on 91st Avenue between 84th and 85th streets, and was pronounced dead at Jamaica Hospital Medical Center four hours later.

It comes amid a recent surge in violence across the city. Last month in New York, there were 205 shootings up 130 percent from the same period a year before, and 39 murders, according to data released by the New York Police Department.

However, it remains a fraction of the high crime rates seen in the early 1990s, when more than 2,000 New Yorkers were murdered each year. Chicago and other cities have reported similar upticks.

Officials and criminologists do not often agree on the causes of increasing crime, except to say those causes are complex and exacerbated this year by the CCP (Chinese Communist Party) virus pandemic that killed thousands of city residents and wreaked havoc on employment and the economy.

“There’s not one cause for something like this,” Mayor Bill de Blasio told reporters earlier this month. “The fact that the court system is not working, the economy’s not working, people have been pent up for months and months: so many issues underlying this challenge.”

Leaders at the NYPD have taken a different view, blaming the crime increase on a wave of police reforms that was prompted in part by more than a month of protests against police violence sparked by in-custody death of George Floyd in Minneapolis on May 25.