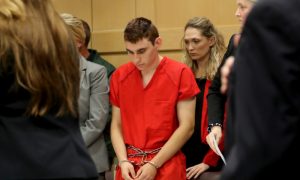 Samantha Aguilar, 16, died after being thrown off a fairground ride in Texas after complaining about her seatbelt.

Aguilar had been on a ride called “the Sizzler” at the El Paso church carnival with two of her friends, one of whom was also flung out of her seat. Her friend only suffered minor injuries and survived.

The aunt of one of Aguilar’s friends said that Aguilar was “clinging on to her belt for dear life,” according to Channel 9 News.

After Aguilar complained about the broken seatbelt, the operator of the ride told her she would be “fine without it.”

The aunt also said that all three girls were allowed to sit in one carriage, when usually only two people were allowed.

The cause of the incident hasn’t been determined. Police say that among the things detectives are looking into is whether regulations were met by the ride operator and vendor.

Aguilar was a student athlete at Hanks High School. “We loved Sam. This girls’ comments last night were, ‘she’s wonderful’, and she is,” said her track coach Kim Gomez.