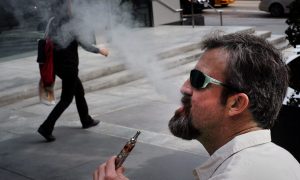 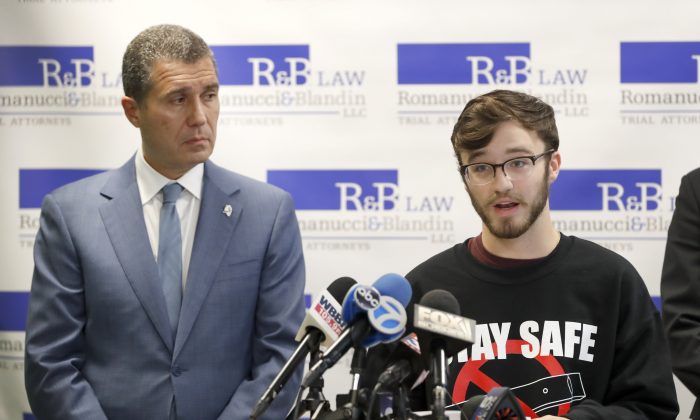 Adam Hergenreder (R) responds to a question as attorney Antonio Romanucci listens during a news conference in Chicago on Sept. 13, 2019. (Charles Rex Arbogast/AP Photo)
US News

An Illinois teenager who was told by doctors that his lungs are like those of a 70-year-old after vaping for about 18 months has filed a lawsuit against Juul, one of the main e-cigarette companies.

Attorneys filed a lawsuit in Lake County Circuit Court on behalf of 18-year-old Adam Hergenreder, who was hospitalized at the end of August for about a week after complaining of nausea and labored breathing.

“To put it mildly, Adam didn’t stand a chance to avoid getting hooked on these toxic timebombs,” said Hergenreder’s lawyer, Antonio Romanucci.

Hergenreder recently told the Chicago Tribune that he wants to warn others about vaping.

“People just see that little [vape] pod and think, how could that do anything to my body?” Hergenreder said after being admitted to the hospital. “I’m glad I could be an example and show people that [vaping products] aren’t good at all. They will mess up your lungs.”

He said that last year he started buying homemade devices filled with THC, the high-inducing ingredient in marijuana, off the street. Vaping companies say blame should be put on those black-market devices, called dab sticks, for a spate of hospitalizations.

Friday’s lawsuit did not directly raise that issue, including whether it is possible that the makeshift devices containing THC could have caused or contributed to Hergenreder’s illness.

Hergenreder, from the Chicago suburb of Gurnee, was released from the hospital on Sept. 6 with “significant lung damage,” according to the lawsuit. He appeared with his mother and his attorney at a Friday news conference announcing the litigation. Both wore T-shirts that said “stay safe, don’t vape.”

“It was scary to think about that—that little device did that to my lungs,” the teen recently said. “I was a varsity wrestler before this and I might not ever be able to wrestle because that’s a very physical sport and my lungs might not be able to hold that exertion. … It’s sad.”

San Francisco-based Juul said in a Friday statement that it’s “never marketed to youth” and has ongoing campaigns to combat underage use. It added that its products are meant to help adult smokers wean themselves off traditional paper-and-tobacco cigarettes, which Juul called “the deadliest legal consumer product known to man.”

Among the precautions Juul said it’s taken to ensure young people aren’t drawn to its e-cigarettes was to close Juul’s Facebook and Instagram accounts. The company said it has also deployed technology that restricts a sale until someone’s age is verified.

Juul CEO Kevin Burns told CBS in August after a different lawsuit was filed against the company that it never intended its devices to be used by children.

“And I have empathy for them, for what they’re going through, dealing with their kids trying to go through any kind of difficulties, especially an addiction to a product that has nicotine in it.”

He admitted that the long-term effects of vaping are not known.

The new lawsuit accused Juul of sometimes relying on indirect advertising to children, including by employing social media users with huge followings to promote Juul products in Twitter or Instagram posts.

The lawsuit also names a gas station in Waukegan as a defendant, accusing it of regularly selling Hergenreder nicotine-based Juul products when he was too young to legally buy them. Federal law prohibits e-cigarette and all other tobacco sales to those under 18.

Hergenreder’s case is different from the cases filed by attorney generals in the 1990s against tobacco companies but it could be successful, unlike early cases filed against the companies, she said.

“The industry worked so hard to create doubt, and that dragged out litigation for decades. It took all those lawsuits, whistleblowers, journalism—all of that is what brought all of this to light. And it took all that to counter the campaign of misinformation, for people to see how bad these bad acts were,” Lester said.

The suit comes amid a nationwide probe into vaping, with a particular focus on flavored e-cigarettes. Health officials have urged people to stop vaping until the investigation is complete and President Donald Trump said this week his administration would propose banning thousands of flavors of e-cigarettes.

“People are going to watch what we’re saying and parents are going to be a lot tougher with respect to their children,” he said.

Trump added on Friday, “While I like the Vaping alternative to Cigarettes, we need to make sure this alternative is SAFE for ALL!”

“Let’s get counterfeits off the market, and keep young children from Vaping!” he said.

While I like the Vaping alternative to Cigarettes, we need to make sure this alternative is SAFE for ALL! Let’s get counterfeits off the market, and keep young children from Vaping!

Six Americans have died from vaping-related illnesses, state health officials said, including an adult over the age of 50 in Kansas, a person over 65 in Minnesota, and a person older than 18 in Indiana.

The Centers for Disease Control and Prevention (CDC) said it was probing 450 cases across the country but said there are now 380 cases under investigation.

“The previous case count was higher because it reported possible cases that were under investigation by states. The current number includes only confirmed and probable cases reported by states to CDC after classification,” the agency said in a statement. The cases have been reported in 36 states and the U.S. Virgin Islands.