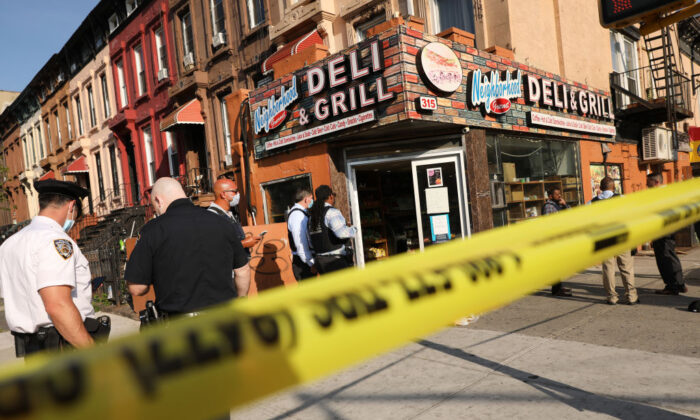 Police stand at the scene of a shooting that happened in the Bedford Stuyvesant neighborhood in Brooklyn on July 16, 2020 in New York City. (Spencer Platt/Getty Images)
Crime and Incidents

A 13-year-old was fatally shot during a gang-related incident on Sunday afternoon in the Bronx, according to the New York Police Department.

The teenager was the intended victim of the incident, according to NYPD Chief Rodney Harrison. The NYPD could not provide an update on the incident as of Monday morning and told the Daily Caller News Foundation that an investigation is ongoing.

“Earlier today, at approximately 3:15 P.M., there was a gang-related shooting in the 48 Precinct’s Belmont section of the Bronx,” Harrison said in a tweet. “The shooting led to the death of a 13-year-old who was the intended target.”

A gunman reportedly opened fire on the teenager in front of a café, Luis Mercado told a CBS affiliate. The teen sustained gunshot wounds to his chest and leg before he was transported to a local hospital where he was pronounced dead, CBS2 reported.

No arrests were made in connection with the fatal shooting Sunday night and the NYPD had not released information about potential suspects, according to CBS2.

A 16-year-old was injured in a shooting at approximately the same time in a separate incident in Brooklyn, CBS2 reported. Nearly 800 shooting incidents resulting in around 920 victims were recorded in NYC as of July 10, up from 612 incidents and 750 victims during the same period last year.