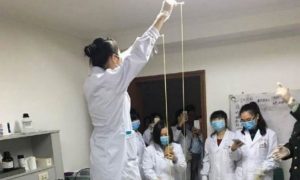 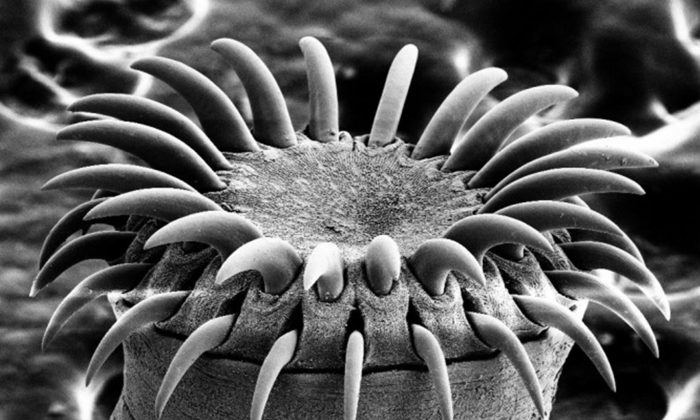 A teenager died after his brain became riddled with hundreds of larvae from a tapeworm often picked up from eating pork.

The case of the unnamed 18-year-old in India was featured in the New England Journal of Medicine, which showed MRI scans of his brain, dotted with white specks that indicated where cysts had formed.

The boy was admitted to ESIC Hospital in Faridabad, India, suffering from “tonic-clonic” epileptic fits.

He was in a confused state, with swelling over his right eye and a pain in his groin.

Ultrasound also revealed that the pain in his groin and eye was caused by further cysts in those regions—by larvae from the tapeworm.

The most dangerous aspect of Taenia solium infection is not the tapeworm absorbing nutrients in one’s gut, which can go undetected for many years.

The tapeworm also produces eggs, which can spread to other parts of the body, where they form cysts and damage tissues—a disease known as cysticercosis.

If cysts form in the brain it is known as neurocysticercosis, and is a major cause of epileptic fits in the developing world.

Anti-parasitic medicines can be used to treat tapeworm infections and some cases of cysticercosis.

But the teenager had so many cysts that his doctors feared the anti-parasitic drug might cause further inflammation and cause swelling in the brain and eyes.

He was treated instead with dexamethasone and antiepileptic medications, but died two weeks later.

According to the World Health Organisation (WHO), tapeworm infections are the leading “preventable” cause of epilepsy in the developing world.

“Humans become infected after consuming undercooked food, particularly pork, or water contaminated with tapeworm eggs, or through poor hygiene practices,” the WHO says.

“Taeniasis is the intestinal infection of the adult tapeworm. When left untreated, a more serious condition known as cysticercosis develops as T. solium larvae invade body tissues. When larvae build up in the central nervous system, muscles, skin and eyes, it leads to neurocysticercosis—the most severe form of the disease and a common cause of seizures worldwide.”

The tonic-clonic seizures experienced by the Indian teenager are what used to be called grand mal seizures.

As the name suggests, the seizures have two phases: First, the person loses consciousness as all of the muscles go stiff as they fall to the floor if they are standing. Then the limbs jerk rhythmically.

According to WHO, “Cysticercosis is a natural infection of pigs, but it can also affect humans, usually when they swallow T. solium egg-contaminated soil, water or food (mainly vegetables).”

“Taeniasis [a tapeworm infection] and cysticercosis are common in areas where animal husbandry practices are such that pigs come into contact with human faeces.”

In California last year it was reported a man appeared at an ER in California wanting to be treated for a tapeworm infection.

Doctors were skeptical—until he produced a grocery bag with a five-foot worm inside.

The patient at first thought that “his guts were coming out,” according to Dr. Kenny Bahn, who treated him at a hospital in Fresno, describing the case on the podcast This Won’t Hurt a Bit.

Bhan was initially mystified by how the patient had contracted the parasite, usually associated with drinking from wells in third world countries.

But the unnamed man hadn’t been out of the country, said Bahn.

“Then he says, ‘the only thing is… I love sushi. Do you think it came from the salmon. I eat salmon almost every day.’”

Salmon are known to carry the parasitic larvae, which can then develop into the full-blown tapeworm in human guts.

However, the cooking process kills them completely. Eating raw fish carries a risk—which is why salmon sushi is flash-frozen, which should make it completely safe.

In 2017, research by the CDC showed that some Alaskan salmon contained tapeworm larvae.