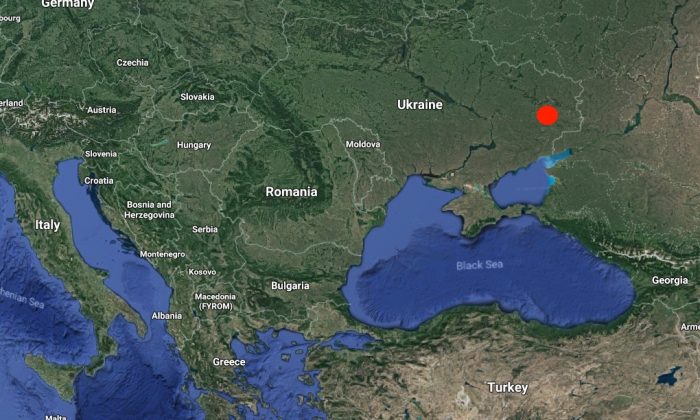 A red marker shows the location of the city of Makiivka in Ukraine, where a boy died after jumping off a 14-story building on Dec. 15, 2018. (Screenshot /Googlemaps)
Europe

Teenager Dies After Jumping Off 14-Story Building With ‘Homemade’ Parachute

A teenager died after his parachute failed to open when he jumped off a 14-story building in Ukraine, according to local reports.

The 15-year-old boy’s mother was watching, together with dozens of onlookers as he threw himself off the building, trusting his life to what some reports describe as a homemade parachute, a crash helmet, and “padding” on the ground below.

The “extreme” social media stunt was filmed on Dec. 15 by the onlookers who appeared to have encouraged him.

Video footage shows a figure waving his arms atop a building under construction in the eastern city of Makiivka, before launching off the edge with a shout.

A parachute can be seen trailing unopened behind him as he accelerates out of sight behind another building, just above the ground.

Awful. His mother was 'so shocked by his death that she refused to leave the spot'

The unfinished building has claimed the lives of three other teenagers this year, according to local media reports.

The boy is identified as Bogdan Firsov, 15, by the Daily Mail.

His mother was standing with onlookers as they filmed and spurred him on, according to reports.

Police and ambulance arrived quickly, but the boy had died instantly on impact. He was wearing a crash helmet, and according to the Sun, there was “padding” on the ground below.

Dozens of people watched the boy prepare to make the jump, according to Stirile, and encouraged him to jump.

“Everyone who watched it was filming. No one realized it was a parachute problem. It happened under everyone’s eyes. He struck the ground and died instantly,” one witness said, according to the paper.

Local residents complained on social networks that the unfinished 14th floor has not been fenced off for 10 years, and the entrance to the building remains open.

Near The Lowest Base Jump

Some local media reports indicate it was a self-made parachute, other reports that it was factory-made, but incorrectly folded.

But regardless of whether it was homemade or factory-made, the laws of physics were stacked against him.

At an estimated 140 feet, the building is pushing the extremes of base jumps that are carried out by highly experienced jumpers specially modified chutes.

The Guinness Book of Records does not record the lowest base jumps, given that many are illegal. But the lowest (unverified) jump listed by Basejumper.com is 110 feet, just 30 feet lower than the Ukrainian teenager’s novice attempt.

Base jumpers who use modified chutes usually have at least 100 regular skydiving experiences under their belts before even attempting to jump off objects thousands of feet above the ground.

A skydiving parachute can in theory open in around three seconds if the skydiver has already reached terminal velocity (around 120 mph). The fast-moving air grabs a smaller pilot chute, which then pulls the main chute out, helping it catch air.

However, it takes around 12 seconds (or 1,500 feet) to reach that speed. That means for low-level base jumps, the jumper isn’t moving through the air fast enough for it to yank out a regular chute in time.

Base jumpers’ specially modified parachutes have a larger pilot chute.

The military uses static-line systems that open the chute using the airspeed of the plane, launching paratroopers with their chutes already deployed, and allowing drops of only 1,000 feet high.