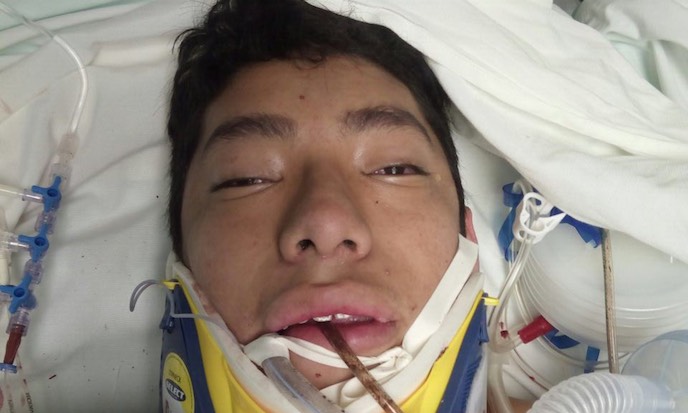 Brayan Martinez Juarez, 18, was crushed while searching for victims trapped inside a collapsed building in Mexico City on Sept. 20, 2017, after a magnitude-7.1 earthquake struck the day before. (Family handout)
Americas

Teenager Crushed While Rescuing Others After Mexico Quake Remains in Coma

MEXICO CITY—Brayan Martinez Juarez, 18, knew his parents would not let him crawl through collapsed and crumbling buildings to save victims of the magnitude-7.1 earthquake that struck Mexico City on Sept. 19.

It was a terribly dangerous thing to do, a type of bravery that has confounded Mexico City as authorities balance the effort to save those trapped under the mountains of rubble with the safety of those that would rescue them.

Juarez is one of the unfortunates among Mexico City’s countless heroes. He lives, but just barely and the road ahead looks to be difficult.

At 8:00 a.m. on the morning of Sept. 20, Juarez quietly, quietly slipped past his brother Jonathan who was resting before going to his job at VIPS, a Mexican chain of restaurants.

It was unlike Juarez to sneak out, said his mother Maria Elvira. He would never leave the house without telling her where he was going and what he was going to do. Neither would his two brothers.

“They always ask permission,” she said.

When Juarez did not return home that evening, the family started to worry.

The quake that rocked the city the day before had struck exactly 32 years to the day of the devastating magnitude-8.0 earthquake that claimed over 5,000 lives on Sept. 19, 1985.

Juarez, like so many others, felt the need to search for people trapped beneath the piles of rubble among 44 collapsed buildings around the city.

“He is a self-sacrificing boy,” said his mother.

What happened when Juarez left home that morning is known only to himself, but some pieces of what he had been doing that day are known.

He made his way to the Enrique Rebsamen School with hundreds of other volunteers. Media had swarmed the area. The school would claim the lives of at least 21 children and four adults as the death toll became known. Surrounding the tragedy were concerns about faulty construction, which some suspect worsened the building collapse.

The school was also the birthplace of the myth of Frida Sofia, the girl who never existed, a scandal that has been heavily publicized in the media.

In the day after the quake, rescue efforts were chaotic and unorganized. While some sites required volunteers to register with identification and protective gear like hard hats and boots, Brayan joined in wearing only his regular clothing, with no ID, and without registering.

Sometime during the day, as Juarez crawled through ruined buildings seeking those trapped within, a building’s canopy collapsed on him, crushing his back.

Juarez was listed as a John Doe when he arrived at Hospital Regional 2 Villa Coapa del IMSS. Fortunately, a photo of his unconscious body made the rounds on Facebook and appeared before his brother Jonathan.

When the family arrived at the hospital, the young man could not be found. In the chaos after the quake, the John Doe had disappeared. The family eventually found him by identifying his sleeping form.

Nobody can say exactly what will come next for the young man.

Juarez is in stable condition but doctors have kept him in an induced coma and say he may never walk again. Jonathan said that when doctors tried to wake his brother, he struggled to breathe due to a punctured lung and began to suffer cardiac strain.

He is still in the hospital, still unconscious, his head swollen while the induced coma gives his body rest it needs to recover.

With Juarez found, now the family has a new worry—medical bills.

Mexican President Enrique Peña Nieto announced on the day of the earthquake that all hospitals must open their doors and offer treatment to all those in need.

Juarez is receiving good care but his mother and brother said they are nervous that Nieto will not be able to keep his promise. Mother Maria is a cook. She makes 200 Mexican pesos per day, about US$11 in a comida corrida, a kind of small restaurant that serves meals at economical prices.

Even if Juarez’s medical costs are covered, the months of recovery will likely demand a wheelchair, physiotherapy, and accessibility renovations to the family home. Maria said she cannot afford to stay home with her son as he heals.

The family has set up a YouCaring page in hopes help may come from friends and strangers moved by Juarez’s story.

All proceeds will go directly to the family to aid in Juarez’s recovery.